THERE’S A PARADIGM SHIFT HAPPENING IN AUSTRALIAN CONSTRUCTION, AS MOMENTUM AROUND NEW ENGINEERED TIMBER PRODUCTS AND THE GROWING USE OF PREFABRICATED BUILDING TECHNIQUES CREATE A PERFECT CONVERGENCE THAT CAN DELIVER REAL DIVIDENDS FOR ARCHITECTS, DESIGNERS, ENGINEERS, BUILDERS AND DEVELOPERS. THROUGH THE WOODSOLUTIONS PROGRAM, TIMBER INDUSTRY SERVICES COMPANY FOREST AND WOOD PRODUCTS AUSTRALIA (FWPA) JOINS INDUSTRY TRAIL-BLAZERS TO CONSIDER THE BENEFITS AND USES OF PRE-FABRICATED TIMBER.

FWPA National Marketing and Communications Manager Eileen Newbury confirms the term “massive timber” is gaining growing currency in the pre-fab construction sphere. One of the most commonly searched areas of the WoodSolutions website, it’s used to refer to specific types of engineered timber designed to be the primary structural components of a building, with the most commonly used massive timbers including cross laminated timber (CLT), laminated veneer lumber (LVL) and glue laminated beams (Glulam).

As Rod Pindar, Principal at Fitzpatrick + Partners architects explains, each has its own benefits in terms of applications. Pindar describes LVL and Glulam as framing components, ideally suited to large span structures, such as warehouses, halls and sports facilities, due to their excellent strength to weight properties. “Netball Central in Sydney’s Olympic Park, designed by Scott Carver for Netball Australia, is an example of this, with what are currently Australia’s largest LVL portal beams used as the primary structure.” LVL and Glulam are also being increasingly applied in the commercial and education sectors as an alternative to traditional construction options. CLT, on the other hand, is a large structural panel system designed originally for residential floors and walls. However it is now being adopted in a variety of applications across a wide range of building types.

“Fabricated off-site with state-of-the-art CNC machinery, these [massive timber] structures are delivered to site ready to assemble and are extremely quick to erect,” says Pindar.

“Work on site is typically handled by small teams using cordless power tools, resulting in quiet, clean and safe working conditions. Fixing of services or other components can be easily handled with simple tools whilst waste is both minimal and recyclable.” CLT construction can also utilise a host of proprietary connectors, plates and screws for easy on-site assembly.

“I think there is tremendous potential both for increasingly efficient and beautiful methods of massive timber assembly,” says Pindar. “The best example to date is certainly Japanese architect Shigeru Ban’s Tamedia Office Building in Zurich, with its stunning exposed Glulam structure and locking pin connections.”

He believes massive timber, with its aesthetic quality and sustainability, can play a significant role in helping to alter perceptions of prefabricated construction.

“Look at the ten-storey Forte Living apartments by Lendlease in Melbourne’s Docklands for example. It’s recognised as a quality, innovative development and not encumbered in any way by the rapid, prefab construction techniques that delivered it,” he says. Pindar confirms Fitzpatrick+Partners has done extensive research into hybrid systems for commercial projects using CLT floor slabs or timber cassette systems in conjunction with steel framing components.

“With these types of systems there is the potential to eliminate wet trades entirely, allowing the interior fitout and fixing of services to follow immediately after the erection of the superstructure, which itself can be erected incredibly quickly.”

The FWPA’s Eileen Newbury adds that there are a number of developments in the supply chain in Australia, including new educational and advisory services from WoodSolutions, that will accelerate the uptake of massive timber and timber prefabrication in general. 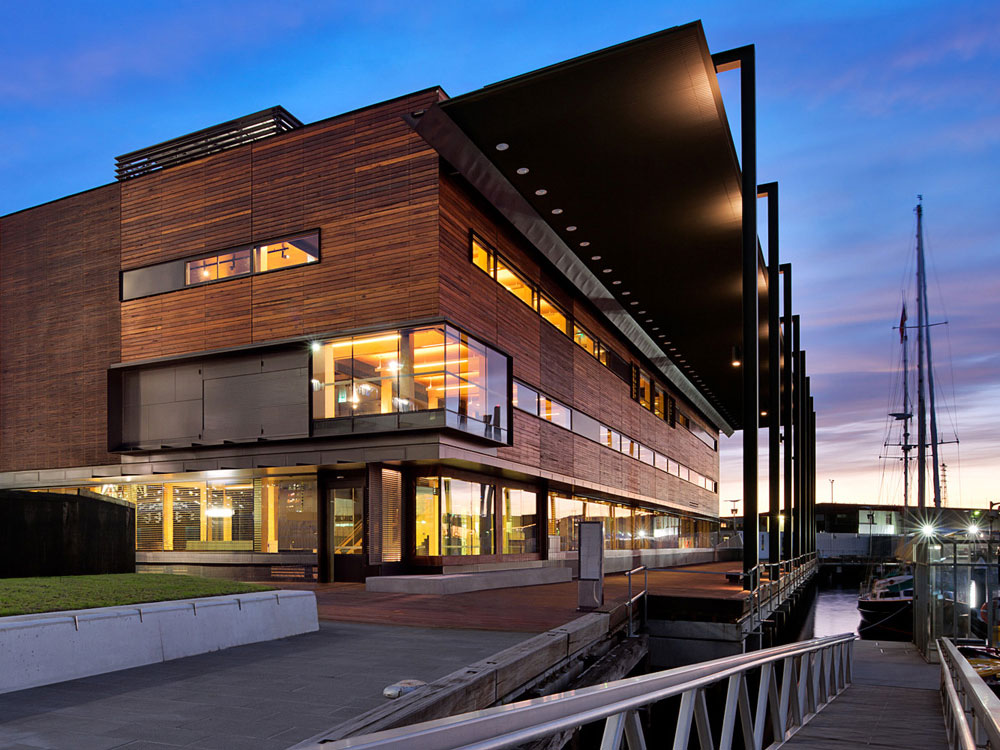 Library at the Dock by Clare Design and Hayball, Melbourne. 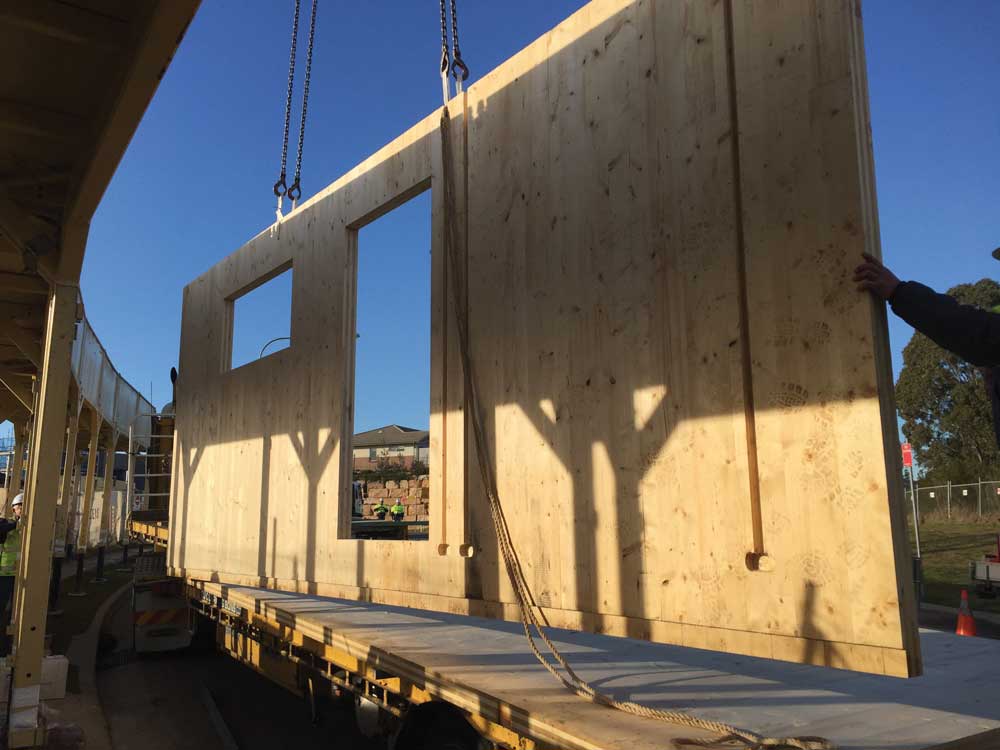 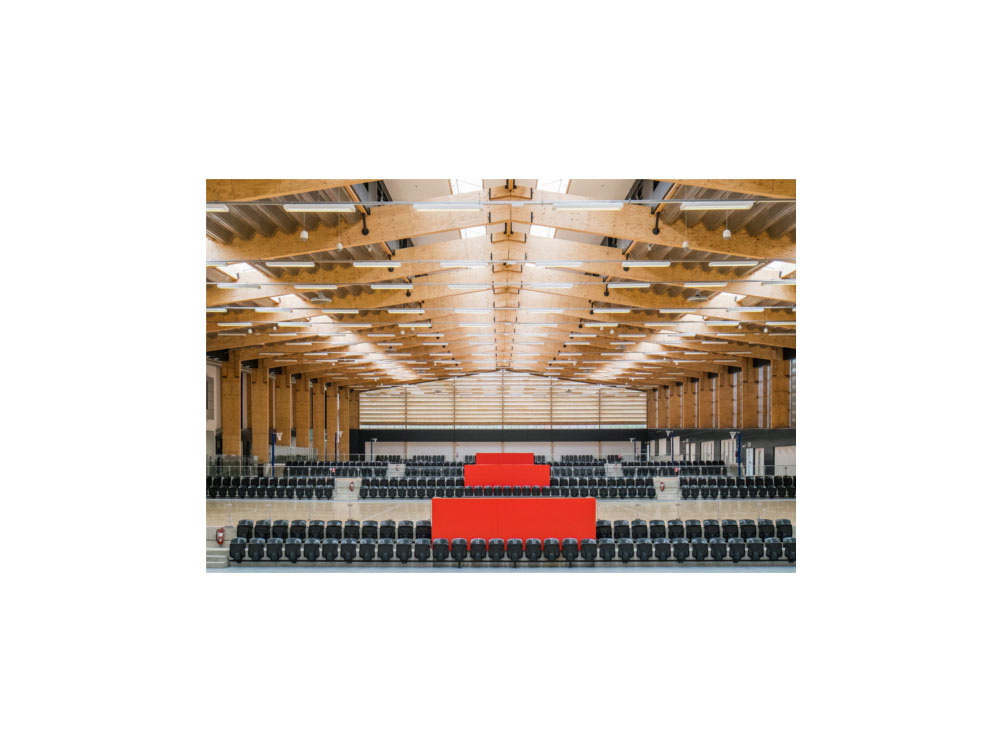 “In addition to massive timber projects, there are also panellised prefabrications plants and projects, such as CSR’s Velocity, that build high quality engineered wall and floor elements. Developments like this show that there’s market potential to expand more traditional ‘stick’ timber framing offsite construction too,” she says.

One company becoming heavily involved in the prefabrication sector is Lendlease, which after completing Forte, then constructed The Library at the Dock, an award-winning Six Star Green Star public building made of massive timber. The company is currently completing a major six storey commercial office project at Barangaroo, also with massive timber. It is also launching its own prefabrication business, DesignMake, which will produce building components, primarily from CLT. Construction company Strongbuild, currently completing the three tower multi-residential Macarthur Gardens project using CLT in Sydney’s West, is also in the process of constructing its own prefabrication facility.

Further south in Victoria, XLam Australia is building the first Australian CLT production plant in Wodonga, and expects to be in full production by mid-2017.

Australian Business Development Manager for XLam Australia, Rob De Brincat, says the message the company has been garnering from industry is that it wants a “value-add” beyond just supply of CLT. He says the construction industry sees the benefit of having locally produced panels, and the company also aims to offer a full package of services, from assistance with design and engineering through to installation. Space has also been set aside in the factory for expanding the CLT production capabilities to include installing components such as door frames and windows, before the CLT panels are transported to the build site.

“The way CLT is designed and modelled in CAD allows [production] to route the service tracks and understand where the plumbing goes,” he says. He adds that recent engineered timber projects, such as Strongbuild’s Macarthur Gardens, are encouraging more companies across the industry to realise the advantages of engineered timber and consider it for more projects. “To grow the market in this space, it is important people realise you don’t have to be a large player, CLT can bring benefits to jobs of all types and sizes; it really depends on the specifics of each project.”

The XLam operation will also be focusing on hybrid solutions, and is looking to work in partnership with suppliers of Glulam and LVL. With the primary market demand leaning towards complementary products and building systems and integrated designs, prefabrication is the biggest market opportunity for such materials, according to De Brincat. Using engineered timbers means buildings can have components supplied that are put together “like Meccano”.

An example of a complementary approach for a large project would be prefabricated Glulam beams and LVL columns that are erected on site, with tilt-up CLT walls that are pre-lined and have windows already in place. Dr Robert Crawford is Senior Lecturer in Construction and Environmental Assessment at the University of Melbourne, and one of the researchers involved in the ARC Training Centre for Advanced Manufacturing of Prefabricated Housing. He is also leading a research project for the University’s Thrive Research Hub on timber pre-fabrication and the potential to create carbon-positive buildings.

Dr Crawford says the advantages of prefabrication include an increase in the quality of construction, improved worker safety, reduced construction waste and potentially reduced costs, while construction speed is also improved.

“You are not held up by weather, and in the factory you can build 24 hours a day. The factory environment also increases the ability to control construction.”

“When engineered timbers are used in prefabrication, there are added environmental benefits,” he says. “Timber is a store of carbon and is a renewable resource. It is also potentially a sustainable resource.”

The degree of environmental benefit depends on the resources used in the harvesting and manufacture of the timbers, and transport and processing add to the carbon footprint of the product. When the products are imported, the carbon footprint is greater. “That will change a little with the new Victorian facility XLam is building,” he says.

Another benefit of timber, including engineered timbers, is that it’s an easy material to work with both for assembly and disassembly. It is also easier to rout in services, even after construction, compared to concrete, and connecting components is also easily achieved using screws.

“Engineered timber systems can also be combined with other systems,” Dr Crawford says, “such as prefabricated service risers for large multi-storey buildings or prefabricated bathroom pods.” “Prefabricated floor cassettes are also another approach that is being increasingly used,” he adds, “and many companies that have established themselves as frame and truss prefabricators are moving into this as a product line. These include hybrid steel and CLT systems, and also all-timber systems.”

“When engineered timbers are used in prefabrication, there are added environmental benefits. Timber is a store of carbon and is a renewable resource. It is also potentially a sustainable resource.” Dr Robert Crawford – University of Melbourne

In engineering terms, as a structural material, massive timbers are one of the materials best suited to prefabrication, according to XLam technical manager and former AECOM senior structural engineer, Nick Hewson.

He also believes the increasing use of Building Information Modelling [BIM] by architects has benefits for prefabrication approaches. “BIM models can be taken almost straight from the designer to the CNC machine,” he says. “There is so much less room for interpretation. Timber and BIM are a perfect match.”

Hewson believes that a mind-set change is needed in the industry to understand and utilise the opportunity to design in the virtual space and then utilise CNC machinery.

This includes how services are designed and integrated. Instead of the current trend for services consultants to performance specify and leave the designing to the subcontractors, they could model services designs in 3D and then the subcontractors could implement it in the offsite setting.

Principal Structural Engineer for Bligh Tanner engineers, Toby Hodsdon, has been actively exploring the use of CLT on a wide range of projects, including aged care, education and multi-level residential. Innovations using CLT are starting to appear, such as a prototype for lightweight modular bathroom pods using thin CLT walls. Another project sees the firm working on utilising prefabricated CLT elements is an island resort in Queensland, where shipping of materials for conventional construction would be extremely difficult.

“Lightweight modular design particularly lends itself to difficult and remote sites,” Hodsdon says. “It is also ideal for sites with poor ground conditions or limited crane space when its lightweight nature brings very tangible benefits to a project.”

He says one of the main differences with these new forms of construction is that considerable technical thinking needs to be done before a project commences. This engineering-oriented thinking includes planning lift sequence and methods, considering how stability will be managed during installation, and even how components are stacked into shipping containers so they can be fed to the onsite crane in the right order.

“If thinking upfront is code for thinking forward to the future, it just about sums up the outlook for prefabricated timber in Australia; it’s massive,” concludes FWPA’s Eileen Newbury.

“We see part of our role, through both FWPA and WoodSolutions, as ensuring that the timber supply chain and the design and build industries are up for the challenge!”■