Design for Manufacture and Assembly (DfMA) can be deployed in many forms, sometimes uses different variants and even occasionally adopts different names. However DfMA principles, which entail an holistic design process that encompasses both how a structure will be manufactured and how it will be assembled, is essential in all offsite precast concrete builds.

The DfMA concept might be obvious, but it entails more than just designing for manufacture and designing for assembly. DfMA is a tool used to choose the most cost effective material, which is then used from the earliest of stages in a structure’s design to deliver cost reductions and shorten construction processes.

Inherent in the two design phases is the role of the designer, who most influences the ability to cut costs, maximise quality and reduce construction time, through adoption of processes that minimise product production cost and minimise product assembly cost.

DfMA takes the process of off-site manufacture one step further by encompassing and optimising the concept and benefits of off-site manufacture right from the get go. From the outset, the designer ensures that structures are designed for prefabrication and all that entails, and at the same time their designs ensure that assembly efficiencies are maximised. Products are designed to be manufactured in a way that makes assembly a quick, easy and safe process.

When it’s well executed, the beauty of DfMA is that allows a project to be built virtually, well before construction takes place on site. This enables many of the problems that arise during a traditional build to be bypassed as they’ve already been addressed in the digital phase.

“The DfMA concept might be obvious, but it entails more than just designing for manufacture and designing for assembly. DfMA is a tool used to choose the most cost effective material, which is then used from the earliest of stages in a structure’s design to deliver cost reductions and shorten construction processes.”
Sarah Bachmann – NPCAA

These principles clearly have a key role to play in the precast arena. By virtually building a structure, thinking in advance is allowed to flourish, particularly when major sub-contractors are able to have early input. This early involvement is critical to maximise the efficiencies and design possibilities that are offered by the approach.

Being manufactured off site in purpose-built factories, the inherent benefits of precast concrete can significantly benefit a building or civil project, both structurally and aesthetically.

And being factory made has its own advantages where design for manufacture is concerned. Efficient, highly evolved and often automated processes ensure high quality outcomes and manufacture can occur while site preparations are underway. There is minimal waste and exact products are delivered to site just in time and in the right order, ready for a speedy assembly.

A highly flexible product, precast is ideally suited for application in a building’s floors, beams, columns, lift shafts, staircases and facades, or in any manner of civil works. Precast concrete can be formed into any shape, colour or texture. Critical in this is for design professionals to have a thorough understanding of the full breadth of possibilities, and that is easily achieved by involving the precast manufacturer early in the design process. Technologies are constantly evolving, and it can be difficult for a designer to keep up with the latest developments.

In the case of precast, we’d recommend designers talking with members of National Precast Concrete Association. Involving a precast specialist as early as possible, the advantages are many. Structures can be designed from the outset for manufacture, avoiding the all-too-common necessity to redesign when that has not been the case, thereby saving in unnecessary extra design costs. Early involvement allows a precast manufacturer to recommend design considerations that will optimise the efficiencies of repetition, transportation, placement of componentry, site access, craneage and scheduling. The precast manufacturer will also be able to inform designers of the myriad of possibilities when it comes to shape, colour, texture and finish, thereby giving them the full suite of design options (and their associated costs) up front for consideration.

Meanwhile, assembly is a key element of the build that can be enhanced by the use of DfMA. In the case of the design and erection (or assembly) of precast elements in buildings, AS 3850:2015 Prefabricated concrete elements, provides detailed requirements and commentary on the design, manufacture, handling and erection of prefabricated concrete elements. It requires the erection designer (an engineer) to design for the safe handling and erection of all prefabricated elements. Requirements relate to all facets of the temporary works phase, including for example, details of cast-in items, lifting, sequencing, adequate bracing, designing for progressive collapse and integration into the final structure.

41X, Victoria’s home for the Australian Institute of Architects, designed by Lyons Architecture, engineered by Winward Structures and built by Hickory, incorporates complex geometric concrete precast wall panels integrated with high performance glazing, precast columns and BubbleDeck precast flooring. The 21 level building sits on a small footprint of 285m2 achieved a 5-star Green Star rating and was the first commercial office building in Melbourne to target carbon neutrality over its 30 year lifespan. Logistics were particularly important in terms of accessing the site easily and assembling the build in a sequence that would create minimal disruption. Early involvement by the precast manufacturer Euro Precast, meant the benefits of using precast could be maximised during design, manufacture and erection (assembly).

Hailed as a landmark building, Victoria’s new Geelong Library and Heritage Centre also utilised DfMA principles. It features a unique dome design and precast Glass Reinforced Concrete (GRC) cladding, which is central to the architecture of the $45.5 million project. The dome comprises 332 light weight panels that were produced in Asurco Contracting’s Adelaide factory. Manufactured complete with a secondary steel sub-frame, the panels are asymmetrical and geometrically pentagonal or hexagonal.

They were carefully transported to Geelong and then bolted to the primary structure to create the domed façade. Once again, Asurco Contracting became involved early in the process to maximise efficiencies.

Meanwhile, located in Tugun, Queensland and adjacent to the Gold Coast Airport, is one of Australia’s greatest construction achievements – the 125ml/day Gold Coast Desalination Project. As the largest desalination plant on the Eastern Seaboard, the project was designed to meet the water needs of at least 400,000 people, and features intake and outlet tunnels running between the ocean and the desalination plant. The tunnels were constructed entirely from precast concrete manufactured by Brisbane-based Precast Concrete Products. Each tunnel ring comprised six tunnel segments with trapezoidal vertical joints and a high dimensional accuracy of +/- 0.3mm. 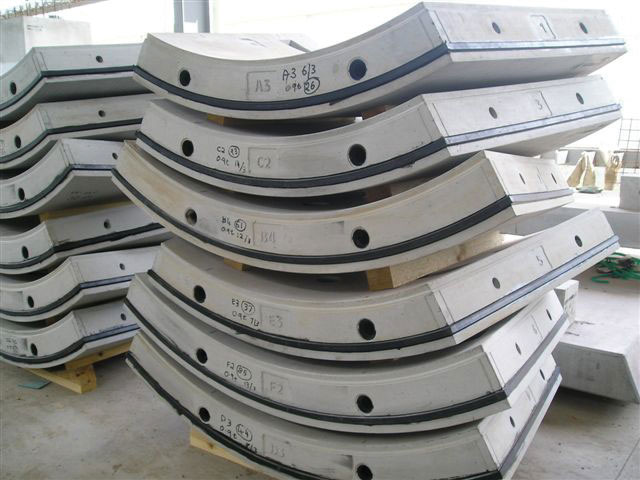 After being transported to site, they were placed using purpose-built tunnel boring machines from Germany, which excavated the tunnels before placing the segments. Manufacturing the segments to such tight tolerances, transporting them to the right location and positioning them correctly, would not have been achievable without DfMA principles.

None of these projects would have been possible without the use of precast concrete and whether the methodology was known by another name or not, DfMA was undoubtedly critical to the successful completion of each. ■