A TWO-YEAR RESEARCH PROJECT UNDERWAY IN GERMANY IS FOCUSING ON UTILISING EXISTING TECHNOLOGY TO HARNESS THE POTENTIAL OF 3D CONCRETE PRINTING WITH A VIEW TO CREATING AFFORDABLE HOUSING, WRITES JAMES BOSTON. 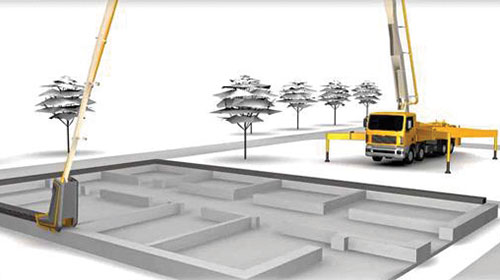 The project involving Professor Jurgen Weber from Dresden University of Technology is focused on producing concrete without formwork that he says will be used every day in the future.

“3D printing has been around for number of years and we can’t imagine a world without it anymore,” Weber says.

“Whether it is a desktop printer, or much larger in industrial applications, it has all evolved from the industrial prototyping industry.”

“The question is, can it be used onsite for the construction industry?”

The team from Dresden has conceived of CONPrint3D, a technology that Weber says could allow for effectively 3D printing concrete on a large scale.

“Concrete, one of the most used building materials today, can still be very expensive, especially when taking into account the cost of scaffolding and formworks that are currently necessary for securing concrete in its desired shape.”

“Additionally, after being used once, many pieces used for the formwork, such as wooden structures, cannot actually be reused for other buildings.”

“The technology is designed to be capable of directly applying concrete to the building site without additional formworks through an additive manufacturing, or layer-by-layer system.”

Weber describes the use of a special mix of fast setting concrete that is extruded through a print head nozzle, “guided with geometric precision by a large scale robotic system.”

The robotic mechanics for the CONPrint3D have been based on more conventionally used machinery, like track-mounted concrete pumps, which extrude concrete mixtures through a pump based system.

Weber says a feasibility study of CONPrint3D is now underway which includes analysis of other developments in the field.

“Four years ago it started with a project called Contour Crafting in the USA, last year a company called WinSun in China printed entire houses.”

“Total Kustom in the USA have a 3D printer printing an entire hotel whilst the Dubai Future Foundation hope to print 30% of houses all new in Dubai by 2030.”

“However, many questions are left unanswered and there are only a few publications based on science.”

“On site the conditions are special, this is our challenge, so we would like to base our technology on scientific findings.”

The objectives of CONPrint3D include having a formwork-free shaping system on-site, using existing machines whilst also being profitable.

“To do this, we looked at robot controlled concrete pumps, that can print the walls layer by layer,” Weber says.

“Our first task was to develop controlled algorithms to control the boom.”

“The booms need to be adjusted to ensure it stays on the trajectory – the height being constant.”

Initial testing saw some questionable horizontal accuracy, which was accounted for by deflection in the boom, something that the algorithm is being adjusted for.

“We also thought we could rely on existing printer head technology, but this is something we would like to further develop.” 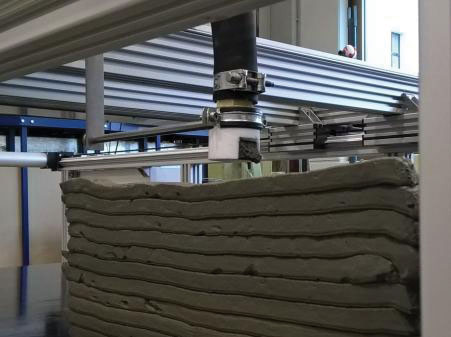 In the lab. Compression strength of CONPrint3D has been measured at up to 80 MPa at 21 days.

“There is common ground on this process however, all of the projects known to us, Concrete thread is printed and formed layer and layer to produce a straight wall.”

Despite these issues, Weber says his team has found there is major potential to commercialise the technology.

“We found it would be suitable for construction up to five levels.”

“This means it could replace up to 75% of German construction, based on the share of masonry construction.”

“And in terms of profitability, at a printing rate of 150mm/s and thickness of 50mm, you could print a house in a day while saving up to 30% in cost.”

The bond strength between different layers often referred to as the ‘Achilles’ heel’ of 3D-printing with concrete. A week bond would mean a low structural stability, especially, for lateral loads. To investigate the bond quality between printed layers, experiments were conducted by applying force in both perpendicular and parallel directions to the layer-interface-plane. From these tests, no significant changes in strength values were observed from both compressive as well as 3-point bending tests.

Compression strength has been measured at up to 80 MPa at 21 days and the cross-section layers connect, making the walls homogenous.

“The technology is designed to be capable of directly applying concrete to the building site without additional formworks through an additive manufacturing, or layer-by-layer system.”

From here the team plans to test out the technology at original scales under construction conditions and work will continue on the development of the concrete formula itself focusing on the extrudability, viscosity and buildability.

“Buildability means the concrete has to be form stable and be able to allow for multiple layers,” Weber adds.■