5 King Street, Brisbane – soon to be the tallest commercial CLT building in the world.

Known as 5 King, the project has been designed by Bates Smart and engineered by Aurecon for Lendlease.

The tower forms part of the $2.9 billion Brisbane Showgrounds redevelopment in Fortitude Valley, 1.5 kilometres from Brisbane CBD. Commenced in 2011 and extending over 22 hectares of brownfield land, the Showgrounds scheme is one of the largest urban renewal initiatives in Australia.

The 5 King tower leverages glue laminated timber (Glulam) for the structural beams and columns, and cross laminated timber (CLT) for all other major elements, including floors, lift-shafts and stairs. The result is a structure that combines the strength of concrete and steel with a low carbon footprint. It will target a 6 Star Green Star Design and As Built v1.1 and a NABERS Energy 5 Star rating.

While engineered timber buildings produce around half as much CO2 during construction compared to equivalent concrete and steel structures, they also produce less CO2 during ongoing operation.

In addition to utilising sustainably sourced timber, the tower will integrate rainwater harvesting, energy efficient lighting and optimised air conditioning. Facilities for 152 bicycles and parking for 56 cars are planned.

Clearly setting new standards for workplace design, as an Australian “first / tallest”, the project also promises to establish new parameters in terms of the benefits that offsite methodologies can bring to high rise construction.

A Lendlease spokesperson confirms the building is constructed from timber from above level one up to and including the level 10 roof, with all timber elements to be manufactured off-site and erected in place upon delivery to site. Meanwhile the services design has been fully coordinated to ensure that all service penetrations are incorporated into the timber design documents prior to manufacture.

“The Cross Laminated Timber (CLT) panels are used for both the wall and floor components. The floor panels are typically 2.25-2.45 metres wide and up to 12 metres long, sizing strategically driven by shipping and road transport considerations. Services penetrations and door openings have been fully integrated into the timber design, which will allow the timber elements to be supplied with coordinated openings pre-cut.”

The building design has been completed incorporating construction sequence and methodology developed during the project planning phase. “The agreed installation sequence will be reflected in the delivery sequence to site, to maximise site efficiencies.”

“Some elements will be prefabricated on-site prior to installation. These include the braced bays and lift cores, while other elements will be lifted and installed in-situ, such as columns, beams and floor panels.”

Interestingly the project’s lead engineer Aurecon will also be the project’s anchor tenant, having committed to a 6,500sqm, 10-year lease over four office levels and a small amount of the ground floor.

Notwithstanding Aurecon’s investment in this regard, it appears the project is also proving beneficial as a test case for collaboration and up-front design. Jared Lillywhite, Technical Director at Aurecon comments:

“The design and construction of 5 King allows a significant amount of prefabrication, including all timber CLT walls and slabs and all glue laminated beams, columns and bracing members. Part of the retention system is constructed from precast concrete walls which is another significant prefabricated element in the building.” 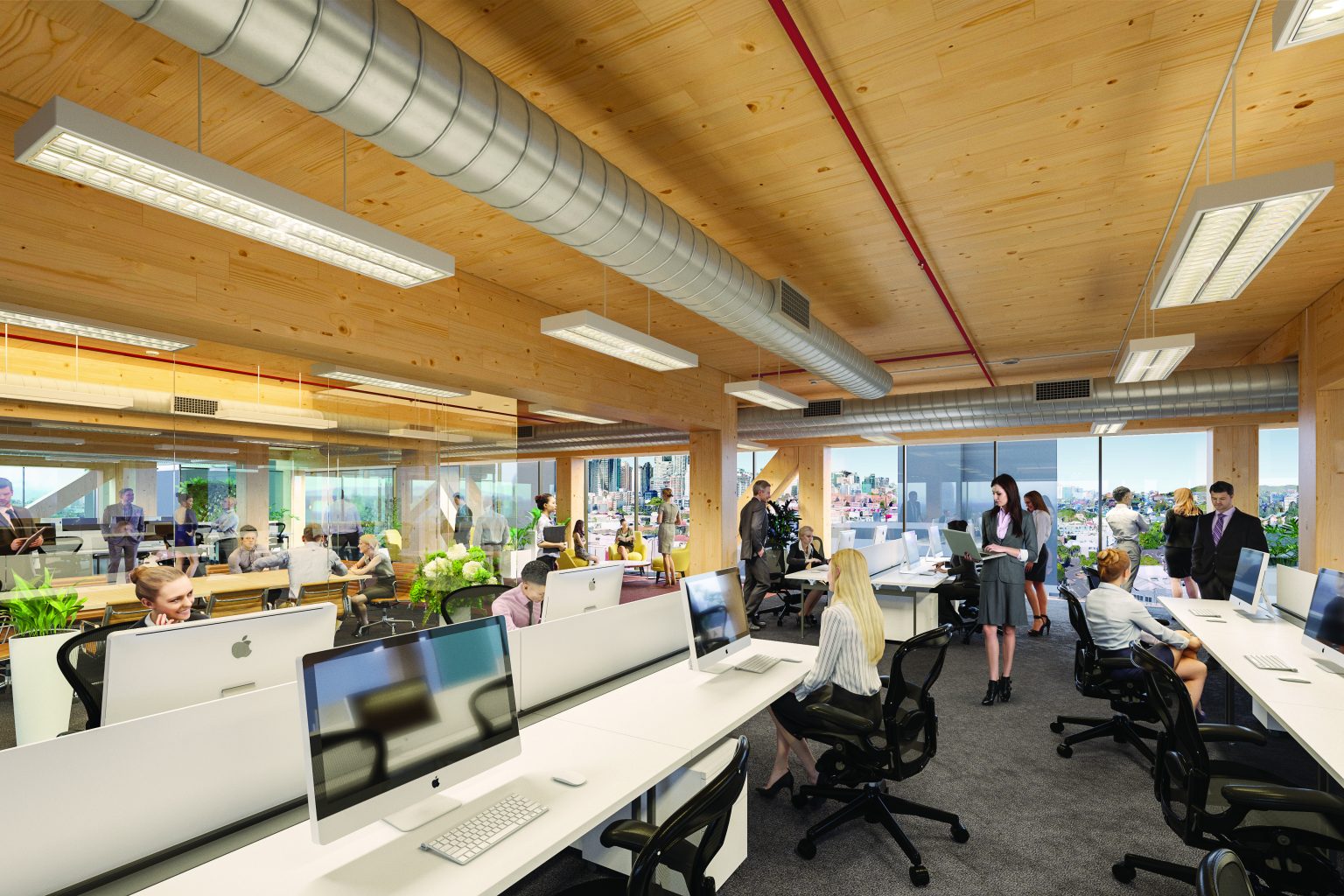 “5 King is unique in that the design of the building was completed well in advance of a traditional building design. The prefabrication lead times of the timber elements meant that the design needed to be finalised at an early stage. We took an approach that any penetrations through the timber elements were to be done in the fabrication stage to avoid them being done on site. This introduced a ‘timber freeze’ deliverable date by which time all services penetrations were locked in place and therefore meant the services design had to be millimetre perfect. The team carried out extensive 3D modelling of the services and structure with significant co-ordination between the disciplines.”

“A number of Design for Manufacture and Assembly principles were used in the project. These include: minimising the number of different components by standardising the members as much as possible throughout the building; keeping a standard column grid and simple overall shape of the building to ease the design and simplify part fabrication; and ensuring that the shapes of the timber elements are standard and therefore package into containers for transportation. In addition the assembly design has been kept very straightforward and repetitive to aid construction. By carrying out detailed design at a very early stage and having a timber freeze milestone, adjustments on site are reduced significantly. Finally flexible components are minimised to ease handling and assembly.”

“This has really been a great team approach with highly talented designers and mangers from Aurecon and Lend Lease, across all disciplines collaborating together in the early design phases to ensure the building can be constructed efficiently and successfully.”

From a visual point of view, the timber construction is designed to echo the vernacular ‘Queenslanders’ of the locality. At ground level, the building features a timber colonnade lined with cafes and restaurants while the glass façade on the main south elevation draws natural daylight into the workplace, with sunshades on the other facades reducing energy consumption.

“The timber structure will be exposed throughout the building, with no suspended ceiling or wall finished to the main office floor plate. The service design has been fully coordinated with the timber structure, to mitigate penetrations through the timber beams.”
Lendlease Spokesperson.

“As a natural material, timber has warm, organic properties that enhance wellbeing; and thus our aesthetic aim is to maximise the exposure of timber in a project. Internally this may involve exposing the CLT timber soffit, columns and beams within the workplace. This requires additional coordination of services, and occasionally painting elements such as ducts that are typically left unfinished.”

“The result is a workplace that has a feeling of being a studio or warehouse environment, that fosters human comfort and wellbeing, and ultimately improves productively and creativity. These are the types of spaces that appeal to today’s generation of tech savvy workers, who are looking for companies with workspaces that encourage a sense of community and wellbeing.”

“Externally timber also communicates that a building is natural and has soul, as opposed to an anonymous office building made with aluminium and plasterboard. The challenge externally is that timber weathers when exposed to sun and rain. We focus on timber being exposed where it is visibly close and can be touched as well as maintained, such as along the colonnade. Elsewhere in the building we encourage the natural tones of the timber to be visible through the glass, so that the timber structure can be seen, without being exposed to weathering.”

With the project planned for completion within a 15.5 month construction duration, it is anticipated that the use of offsite methodologies will result in a six week saving on programme compared to that of a traditional concrete structure.

Excavations are due to commence mid-2017 with the building expected to be tenanted by the end of 2018.■