HOW SWEDEN BECAME THE HOME OF PREFAB

SWEDEN IS WIDELY REGARDED AS A GLOBAL EXEMPLAR OF OFFSITE MANUFACTURING, LEADING THE WORLD IN TERMS OF THE SHEER NUMBER OF PANELISED SINGLE DWELLING RESIDENCES, WHICH REPRESENT OVER 80 PER CENT OF THE COUNTRY’S OVERALL HOUSING MARKET. THE COUNTRY HAS A LONG HISTORY IN THIS SPACE, HAVING BEEN BUILDING HOUSES IN FACTORIES SINCE THE 1940S . SO WHAT ARE THE FACTORS BEHIND ITS SUCCESS? BELINDA SMART REPORTS.

Among the myriad influences that have led to Sweden’s dominance of the offsite space in terms of skills, expertise and industry structure, the most frequently cited factors are the country’s abundance of slow growing, premium quality timber and its uniquely challenging climatic conditions. As the prefabAUS tour bus sped through rural Sweden, both were writ large; pine forests fanned out across the landscape as far as the eye could see and unseasonal May snowflakes dashed the windscreen.

In fact around half of Sweden comprises working forests that are judiciously managed to yield some of the world’s finest quality timber. Sweden even has its own renowned ‘city of timber’. Växjö, which lies at the heart of a large expanse of forests in Småland in the country’s south, has an age-old tradition of timber construction. Strategic environmental work supported by Linnaeus University has given it a reputation as the greenest city in Europe and a showcase of state-of-the art wood construction techniques. Sweden’s punishing climate, characterised by long winters and high levels of rainfall, means housing suppliers have historically looked for ways to quickly and efficiently build high quality, well insulated houses using local timber. Not unlike the Australian dream of the “quarter acre block”, home ownership also features strongly in Sweden’s national psyche. It’s a dream made possible by a timber industry that has worked closely with the construction sector to pioneer methods of producing affordable buildings assembled with prefabricated elements.

Show villages such as the Husknuten prefab house village in Göteborg are commonplace. Here prospective homeowners can visit sample homes from the country’s leading suppliers, demonstrating the level to which consumers are at home with prefabricated houses. 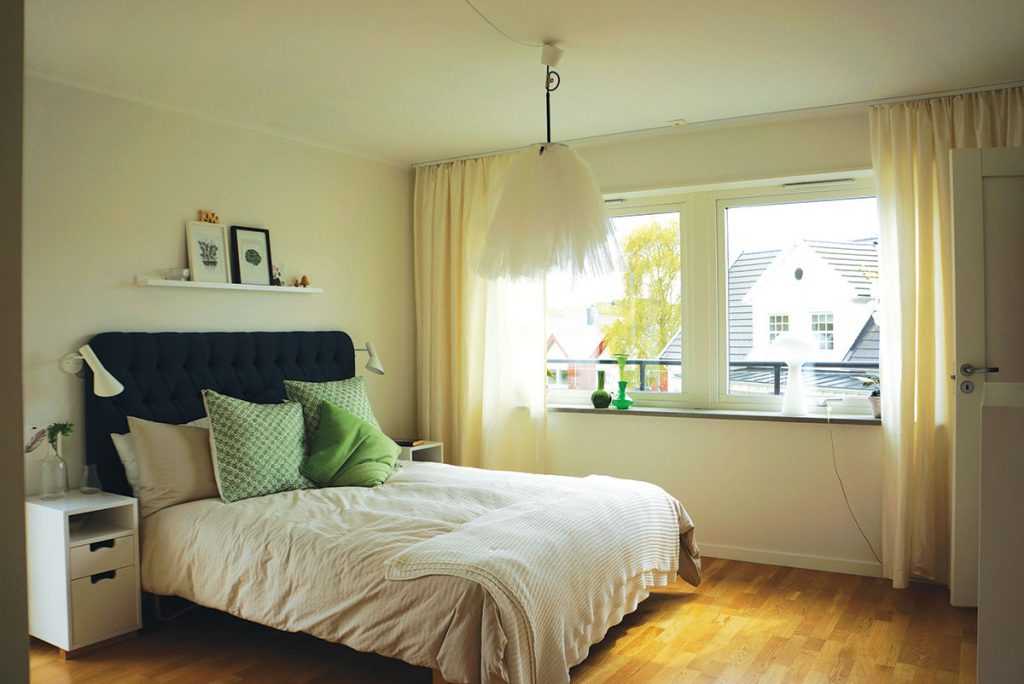 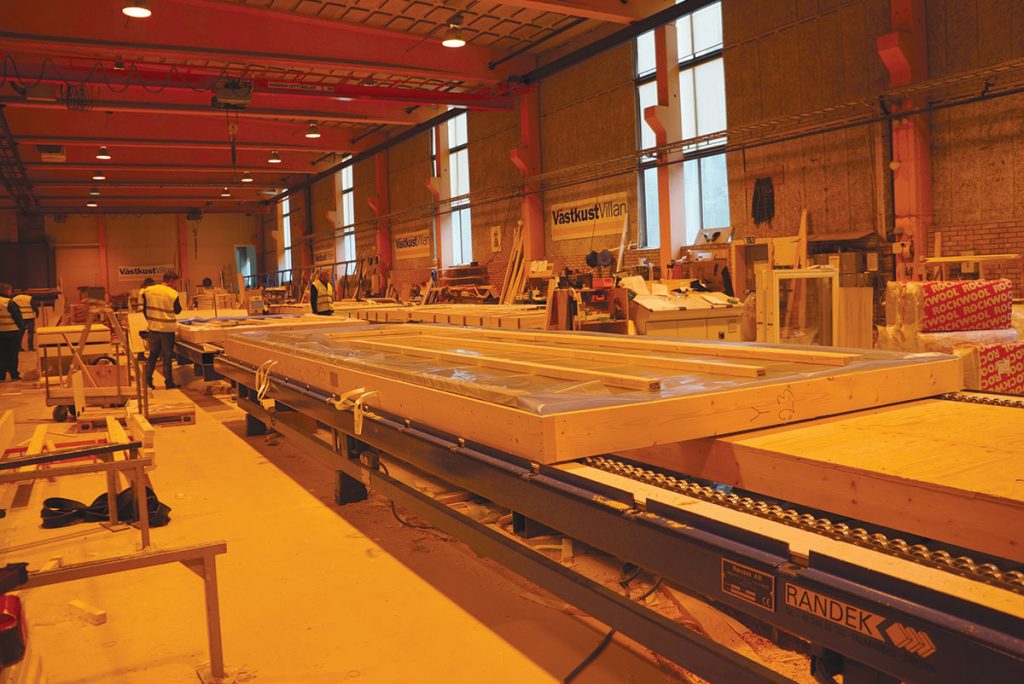 Wall panels being manufactured at the VästkustStugan plant. 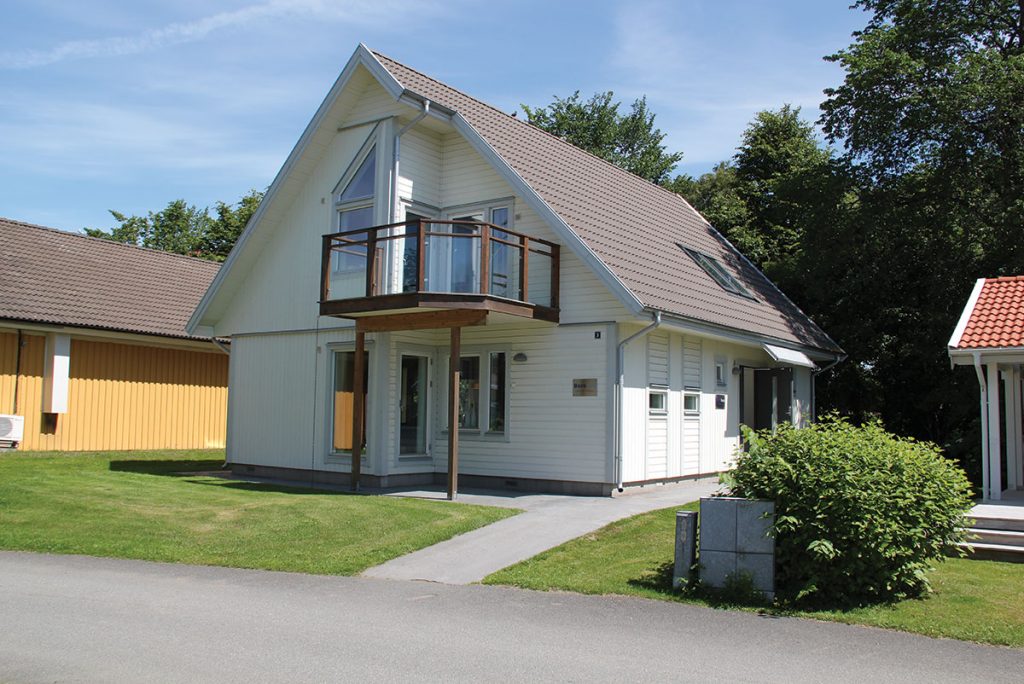 “In Sweden we have a long tradition of prefab housing, about 80 years,” confirms Leif Litzell, of VästkustStugan AB, one of the 10 largest and oldest housing companies in Sweden, which specialises in compact single dwellings across three sub-brands: VästkustStugan, VästkustVillan and Borohu. “It is a safe way to build in order to protect details from rain and moisture. Prefabrication means that within a couple of days, we have everything assembled and protected under the roof of the building. Since windows and outer doors are mounted in the factory, the house is rapidly weather protected and secured from uninvited visitors. A prefabricated house still can be very flexible. Everything you can build is possible in prefab, and consumers in Sweden are aware of that.”

“Prefabrication means that within a couple of days, we have everything assembled and protected under the roof of the building. Since windows and outer doors are mounted in the factory, the house is rapidly weather protected and secured from uninvited visitors. A prefabricated house can be very flexible. Everything you can build is possible in prefab, and consumers in Sweden are aware of that.” Leif Litzell – VästkustStugan AB

Today, Sweden has the world’s highest percentage of factory built wooden houses in the world, mainly using closed wall panels. And the trend is set to continue, with contemporary market stressors providing grist to the prefab mill. Sweden is currently undergoing a major building boom; with skills shortages in traditional construction trades placing further pressure on the sector, prefab houses are in high demand.

Suppliers are rising to the challenge of meeting this demand. BoKlok is a joint venture between two Scandinavian behemoths, construction specialist Skanska and furnishings giant Ikea. It supplies homes that benefit from the inherent economies of scale offered by standardisation while offering price accessible variation across around four to five models. With 7000 homes built so far, the company’s output has more than doubled in three years.

The company’s building system, used since 2002 and based around a flatpack concept, works for buildings up to four floors high. The ‘Flex’ range epitomises its mission to supply affordable quality homes. In the BoKlok factory prefab elements are pre-cut, batched according to project before being assembled.

Another operator, Eksjöhus, offers panelised homes that are designed to be both beautiful and impressively rapid to build; the time frame from slab being finished to lock up can be a matter of days. The company’s origins date back to 1941; it has its own saw mill, manufacturing operation and transport capabilities.

An Eksjöhus spokesperson presenting to the prefabAUS tour confirmed the company offers a range of homes broadly divided into three tiers: the first tier can be customised with extra bedrooms, a garage and so on; the second tier is designed to allow for small changes; the third tier doesn’t allow any changes at all. Using the same room configuration, the appearance of the home can be changed through the addition of extra cladding on site.

“The main focus is to get the roof up so trades can operate in a controlled environment. The longest panels on the production line are eight and a half metres, while 12 metres are also possible with manual input. We operate special lorries with removable ceilings to transport prefab elements efficiently.”

“The main focus is to get the roof up so trades can operate in a controlled environment. The longest panels on the production line are eight and a half metres, while 12 metres are also possible with manual input. We operate special lorries with removable ceilings to transport prefab elements efficiently.” Spokesperson – Eksjöhus.

The company takes forest stewardship as seriously as the houses it builds, investing significantly in state of the art timber processing technology. Evident at its sawmill was computer driven quality control of timber, leading edge scanning equipment for cutting and sorting, drying furnaces and more.

Derome processes half a million cubic metres of spruce a year, with 40 years minimum growth accepted as the optimum period to ensure quality lumber and wood sorted and graded for different uses. The company offers a wide range of prefab products, including traditional and curved trusses, from its truss plant. It also supplies other prefab elements to other branded house suppliers including Skanska, as well as running its own operation for the construction of a wide range of housing types, from individual dwellings to mid-rise developments.

One such, and a highlight of the prefabAUS tour, is a ground breaking mid-rise development, currently under construction, that promises to revitalise the former “no-go area” in the city of Göteborg. 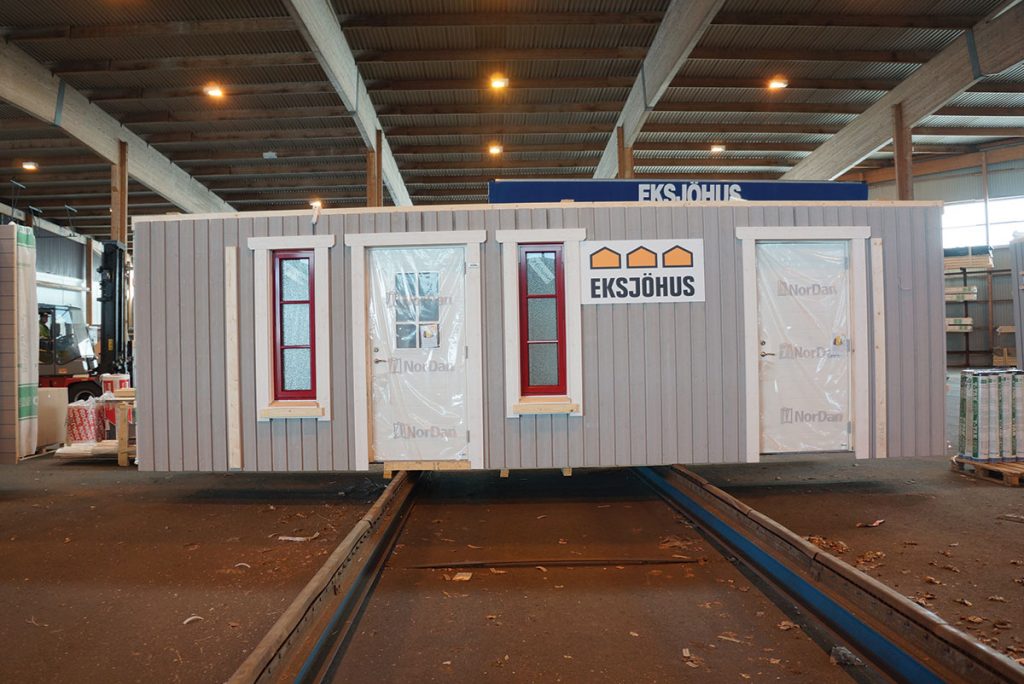 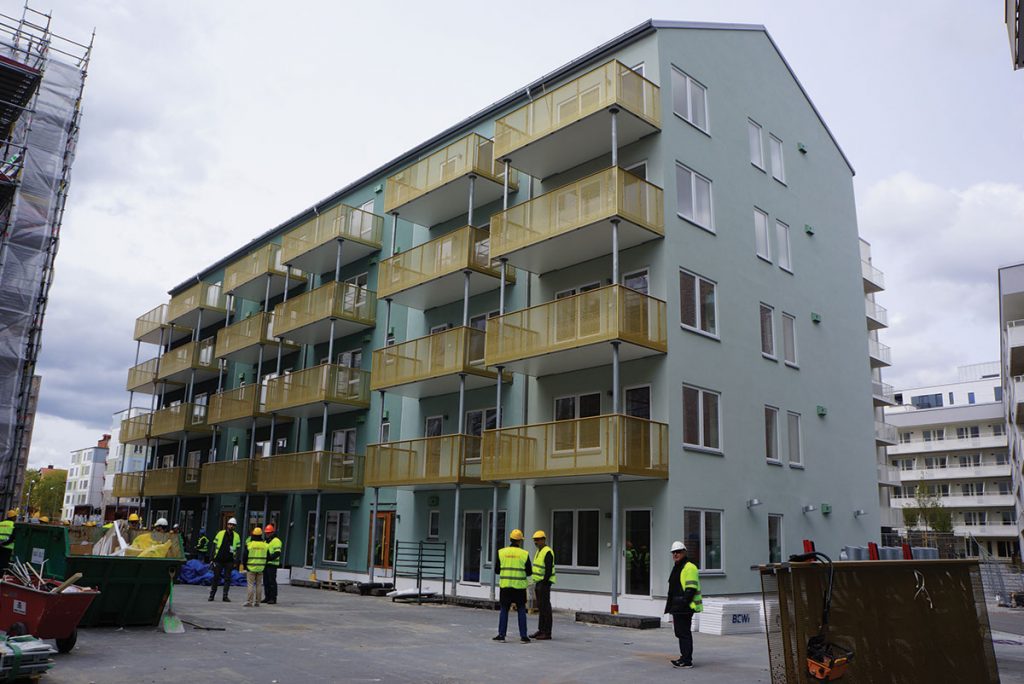 The development demonstrates the capabilities for timber to be used in heights of up to six storeys.

Christopher Hultberg is one of Sweden’s foremost experts on prefabrication. He has worked with a number of companies in Sweden to devise their production lines for prefabricated housing and ordered the first closed wall panel line back in 1985 whilst working at prefabricated housing company Myresjohus, where he ran production for 25 years. In a presentation to the prefabAUS tour he noted that Sweden began producing prefab homes as far back as the late 1800s. From the 1950s to the ‘70s houses were built with smaller elements following a “Lego principle”, while homes using larger elements were introduced in the 1980s.

“It is more than 100 years since the first one-family houses were produced in a factory,” he confirms. And he is convinced that in future more houses will be built in factories, not just in Sweden, but wherever influencing factors such as demand and technology prevail. “Simply, prefabrication offers faster construction, better quality and is lower cost.”■