PULLING TOGETHER TO RECONSTRUCT CONSTRUCTION

‘Big’ is a commonplace descriptor for the US and NorAm: big land mass, big cars, big combined populations. Big challenges; among them, the super-tanker turning circle required to change the course of housing delivery.

The need is pressing. In the US Construction prices nationwide have risen about five per cent in the last three to four years, while anecdotal evidence indicates San Francisco’s Bay Area construction prices have blown out by 30 per cent. In Canada’s big cities the burdens are the same: Toronto is the world’s ninth least affordable housing market according to a 2018 survey by Demographia. The median house in the city costs 7.7 times the median household income, a bigger affordability gap than in New York City.

Carole Galante is the I. Donald Terner Distinguished Professor in Affordable Housing and Urban Policy and the Faculty Director of the Terner Center for Housing. She was previously Chief Executive of Bridge Housing Corporation, which develops affordable homes. She served in the Obama Administration as the Assistant Secretary for Housing/ Federal Housing Commissioner at the U.S. Department of Housing and Urban Development (HUD) and as the Deputy Assistant Secretary for Multifamily Housing programs.

Galante’s presentation to prefabAUS tour on day one of the trip summed up both the hurdles and potential wins at hand.

“While we have a strong culture of innovation in our technology industry, the same cannot be said for construction and housing…yet.”

“But, with costs of traditional construction rising nationwide, something’s got to give. Indeed, skyrocketing home prices in high-growth regions, fuelled in part by construction cost increases, are putting home costs out of reach for many buyers and renters.”

The challenges are familiar to Australian players: the need for new approaches to materials and design, regulatory challenges, and those associated with business model financing and capitalisation. And, she says, a number of of advances are needed to bring offsite construction to scale in the US: among them designing with offsite in mind from day one, focusing on standardisation and refining lender practices.

In the San Francisco market, Galante sees affordable home solutions lying squarely in multi-family schemes. She frames the move to offsite as a values-driven social benefit, particularly on the west coast, which has a strong heritage of socially inclusive endeavour. And central to offsite delivery is what Galante terms “a new factory business model” built around pipeline diversity, with end users ranging from student housing to hospitality to multi-family living solutions.

Fortunately, another NorAm ‘big’ is big thinking. The US, the natural habitat of Google and Facebook, is also home to some nascent disruptors in the construction sector, often backed by big investors and vertically integrated giants with enviable economies of scale. Where Australia’s small but vibrant industry leverages adaptability, ingenuity and resourcefulness, NorAm ventures have heft on their side.

There is also the big heart of social buy-in. The US is renowned for its lack of a welfare system, but in its place, a spirit of collaboration sometimes prevails. Modular housing venture Factory_OS demonstrates this idea.

FACTORY_OS
Located in a 265,000 square foot former shipbuilding factory on Mare Island, Vallejo, in San Francisco’s northern Bay Area, Factory_OS is the brainchild of developer Rick Holliday, who is considered a leader in multi-family housing and community building. He describes the Factory_OS vision: 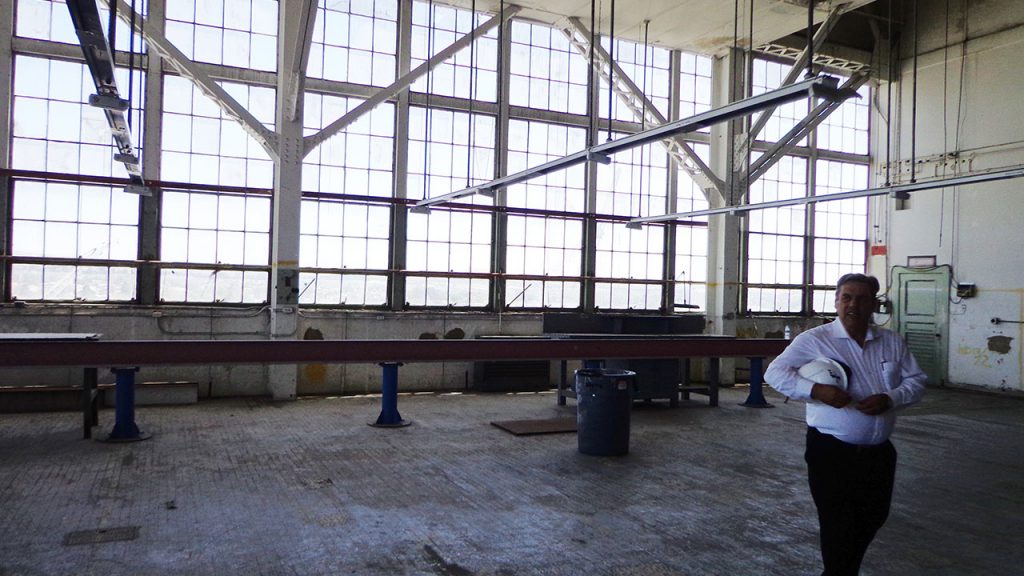 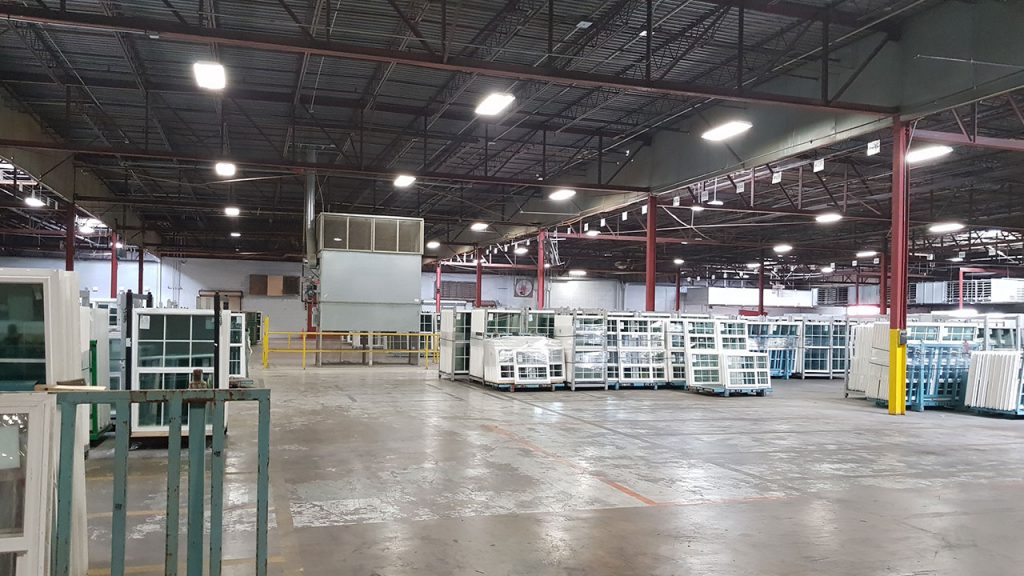 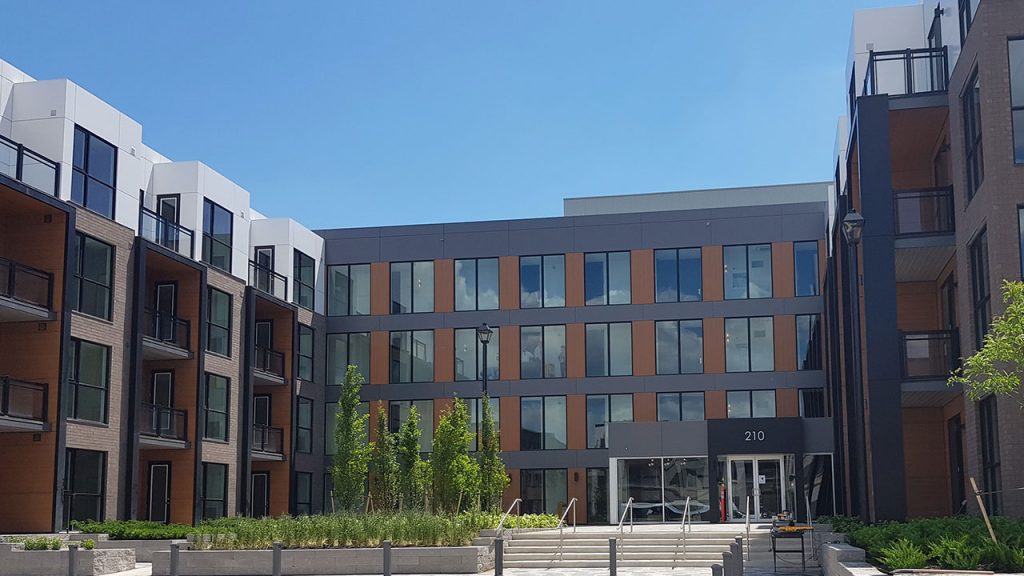 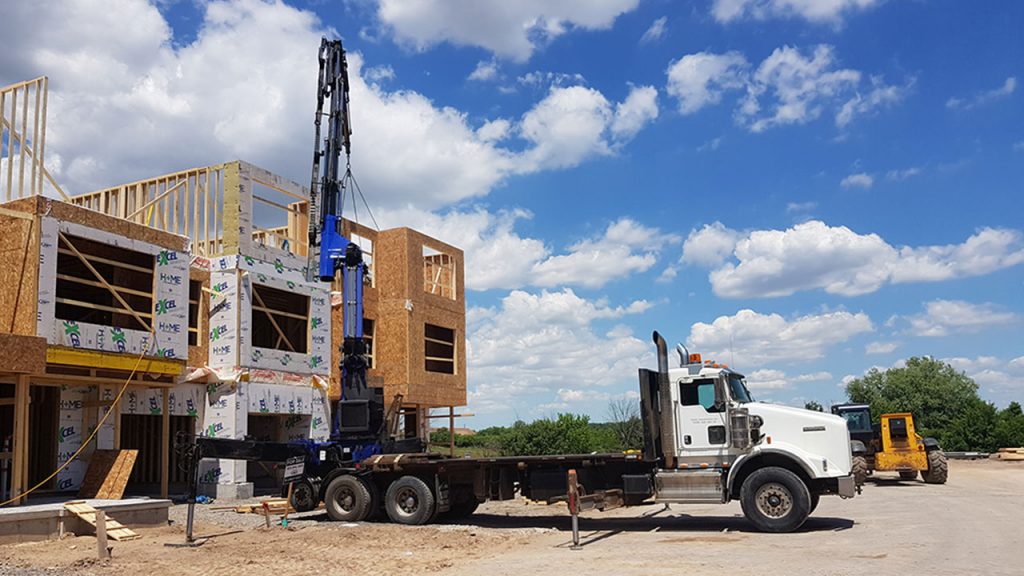 As the founder and President of Holliday Development, Holliday has over 40 years of experience in the Bay Area across market rate and affordable multi-family developments. A former founder of social housing ventures Bridge Housing and Eden Housing, he also has form in offsite multi-family projects in San Francisco. Working alongside him is Factory_OS Chief Operating Officer Larry Pace, bringing his own four-decade track record of multi-family construction experience, along with winning architect David Baker as Chief Design Officer and Carole Galante as Chief Innovation Officer. With the company’s prime movers forgoing salaries until the plant was up and running on the proviso that it would hit profitability in six months, Factory-OS has set to work demonstrating the economic viability of the offsite construction model. At the time of the prefabAUS tour in June, over 1,100 modules had been successfully completed over the previous 18 months.

A COLLABORATIVE MINDSET
Significantly Factory_OS raised initial equity from parties that would not demand immediate returns. It also hired former executives at modular specialists Guerdon, ZETA, and Nemo Building Systems as consultants to learn from the successes and failures of other factories. And its partnership with the Carpenters Union enables it to offer competitive wage rates to workers.

Meanwhile some heavy hitters have thrown their support behind the venture. Google undertook to buy 300 units from Factory_OS to house its employees in Mountain View; a project estimated to be on the F_OS Production Line during Q3 2019. Sidewalk Labs, the (Google parent company) Alphabet-owned urban innovation organisation will occupy some of the R&D Space at Factory_OS, focusing on cost of living and energy usage innovations. Software giant Autodesk also undertook to provide initial design software to Factory_OS at no cost. Georgia Pacific offered to sell its building materials to the company while another supplier, Owens Corning, offered its roofing, insulating, and composite materials to Factory_OS at minimal mark-up.

“Our thinking is that everybody’s got to kick in if we’re housing the needy. The common practice of price gouging has to stop,” says Holliday

At Factory-OS’ low-automation plant, individual components of modular homes are built at a series of dedicated stations, each with around six to eight workers working on 1,000-square-foot modules. The factory’s planned capability is to roll out four modules per day. Modules have bathrooms, kitchens, finishes and appliances installed prior to shipment. They are craned into position on site and where needed, “stitched” together, with utilities connected to the preinstalled wiring and piping. Roofing is dropped into place on site.

“Our thinking is that everybody’s got to kick in if we’re housing the needy. The common practice of price gouging has to stop,” for many buyers and renters.”
Rick Holliday, CEO, Factory_OS.

CLAYTON HOMES
Maryville Tennessee headquartered Clayton Homes is the largest builder of manufactured housing and modular homes in the US with a combined revenue across all its divisions of US$50 billion a year. Purchased by Warren Buffett’s Berkshire Hathaway in 2003, this vertically integrated giant has expanded its reach and boosted economies of scale through numerous acquisitions.

It has its own retail arm, Clayton Homes; and supply arm, Clayton Supply, which operates around 20 supply centres across the US, bolstered by a vast fleet of trucks. Elements such as windows, furnished by the acquisition of a window plant from Elixir Industries, are supplied as pre-assembled packages.

Keith Holdbrooks, President of the Clayton Homes Building Group, told the tour group that securing supply has been a central plank of the company’s growth.

“One of our initial problems was achieving just in time delivery by reducing inventory turn-times. We found we could eliminate the pain points through guaranteed supply. We can pass those savings along to customers and profits. If you can save three dollars a truss across the inputs on a home with 50 trusses and you multiply that across 50,000 homes, that’s a significant saving.” The company has taken a 360 degree view of its mission. Against the background of an acute labour shortage, an important aim is to excel at teaching people about offsite and investing in training and skills. Its largely flat hierarchy-free structure and transparency around performance metrics, together with a raft of employee  benefits, are designed to foster a culture of buy-in. It has also kept end-users front of mind with promotions such as Haveitmade.com, an online video designed to reset consumer perceptions of manufactured housing.

At the plant of its entry level TruHome brand, the tour group watched whole houses being assembled at a frenetic yet ordered pace. The plant relies on highly synchronised assembly processes with minimal automation and achieves an output of 20 entry level homes a day. Continuous improvement initiatives such as project ‘No wait time’ focus on lean processes and time and motion optimisation. One home leaves the plant around every 18 minutes. A TruHome can be purchased by homeowners for as little as US$60,000 ex land costs

H+ME TECHNOLOGY
Owned by Great Gulf, H+ME Technology in Toronto, Canada, is home to a highly automated manufacturing plant that produces proprietary designed floor, wall and roof assemblies to be built as integrated panels. The venture, whose VP and General Manager Kamal Sabaratnam hails from the automotive industry, makes extensive use of 3D computer visualisation, prototyping and fabricating technologies.

The H+ME approach is practical and systematic. For example, its strategy of breaking housing into systems and securing third party certification for every element of the build, has enabled the company to stay ahead of the game as relevant codes come into play.

At its highly automated 200,000 square foot manufacturing facility, floor and wall panels are precision engineered, and stored for just-in-time delivery to site. Robert Kok, H+ME Director of Research and Development says the plant boasts an average 20 minute cycle set up and just in time construction for custom components. Exterior walls have R-Value added using a membrane to meet code. The company can also value-add for builders with additions like wrap membrane or wire mesh to keep insulation in place.

The tour group was taken to Trafalgar Landing Oakville, Ontario, a multi-family development representing quality offering at a tight construction cost of $1200 per square metre. Some homes were under construction during the site visit, with storeys in the process of being stacked, enabled by truck-mounted crane. Cladding and insulation are added onsite, while a completed building nearby featured brickwork also added on site. A company representative commented that prefab façade solutions would be considered going forward. Striving for continual innovation is the name of the game, summed up by Great Gulf President – Low Rise, Tad Putyra.

“Every new build is an opportunity for innovation. We don’t want ideas to die with the project.”

“Every new build is an opportunity for innovation. We don’t want ideas to die with the project.”
Tad Putyra, Great Gulf President – Low Rise.

The prefabAUS North America Study Tour took place from 9 to 15 June 2018, including organisations and businesses in San Francisco, Knoxville (Tennessee) and Toronto.