THE CONSTRUCTION OF AN INNOVATIVE LEARNING CENTRE AT CAULFIELD GRAMMAR SCHOOL IN MELBOURNE HAS FURTHER HONED THE COLLABORATIVE SMARTS OF ARCHITECTURE PRACTICE HAYBALL AND PREFAB/MODULAR SPECIALIST PREBUILT.

Named as a tribute to the late Leslie Roy Hoult AM, a respected member of the school community and former President of the Caulfield Grammarians’ Association, the new Roy Hoult Centre at the Caulfield campus of Caulfield Grammar School in Melbourne is a learning hub designed to inspire and develop technological and scientific innovation. The centre is fitted out with working science laboratories, presentation spaces and collaborative learning areas to promote skills that can be applied to higher learning or within the workforce.

Designed by Hayball, the Roy Hoult Centre is the fourth collaborative project with Prebuilt for Caulfield Grammar, with Hayball novated to Prebuilt under a design and construct contract. The project follows an initial rollout of three new state-of-the-art education spaces designed by Hayball and built by Prebuilt for Caulfield Grammar, collectively known as the Learning Project, which has since gathered worldwide recognition and design accolades.

With the centre nominated to be located in a small unused parcel of land on the Caulfield Campus, bordered by a driveway used by staff and parents, a key challenge lay in completing the build without disrupting the teaching program. Prebuilt Managing Director Rob Colquhoun observes that by designing and constructing entire building elements offsite, the company was able to produce highquality education facilities with minimal disruption to students, along with unprecedented sustainability benefits.

Significantly, the design brought with it some exacting constraints. “Hayball designed the building as an important ‘bookend’ to the school’s frontage to Glen Eira road,” says Colquhoun. “As such the scale and quality requirements were much larger and more complex than any typical two storey modular school building that had been produced utilising a full height perforated screen to deliver an imposing elevation presented fresh challenges for the screen manufacturing industry.

The scale of the internal voided space leading towards the large clerestory roof chambers essentially required that the building was three levels of modular structure.”

“The design also had to address the connection to the existing middle school building with matching floor levels so that the new lift in the Roy Hoult building could then be used to access the entire middle school complex, built many years ago. Another challenge was the presence of an overland flood path that runs right under the building, requiring that clear span footings be installed at over one metre above ground.”

Collaboration has been critical to the success of the scheme. In a series of projects of this type, Prebuilt has been collaborative with Hayball providing construction advice and direction while allowing Hayball to lead the design development and design direction of the project, says Colquhoun. Key among the efficiencies and program savings from using Prebuilt’s offsite solution for this build was the ability to fast-track construction by locking down base elements whilst continuing design development of more specific items such as the science lab design, bathrooms and joinery requirements. 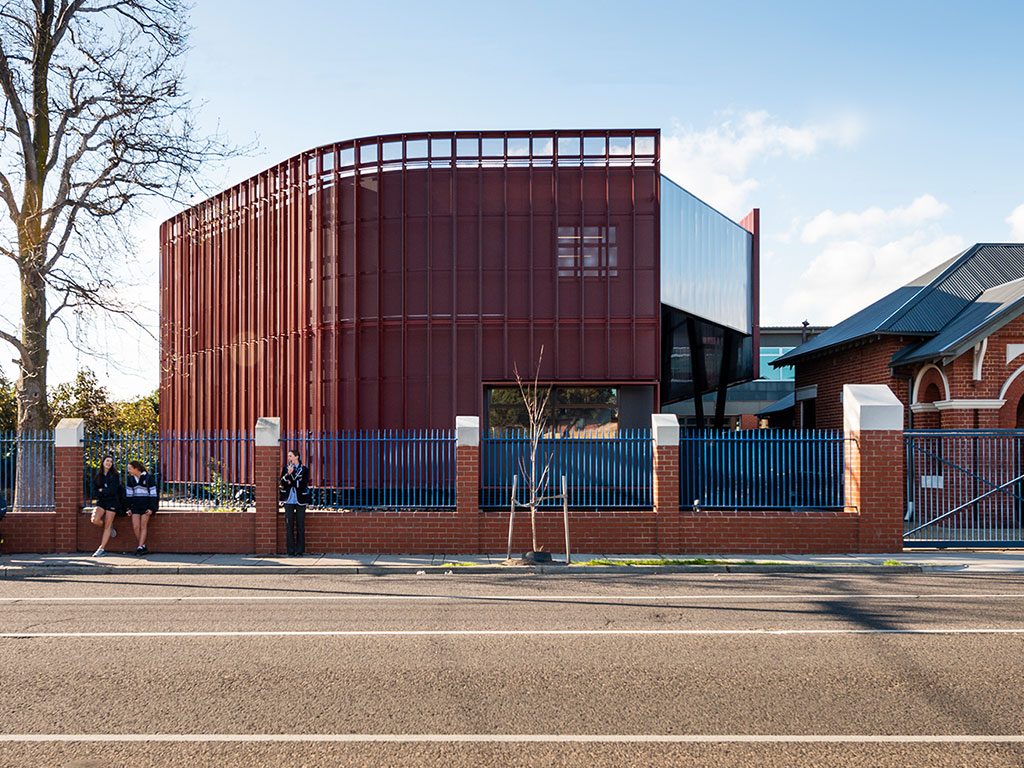 Designed by Hayball, the Roy Hoult Centre is the fourth collaborative project with Prebuilt for Caulfield Grammar. 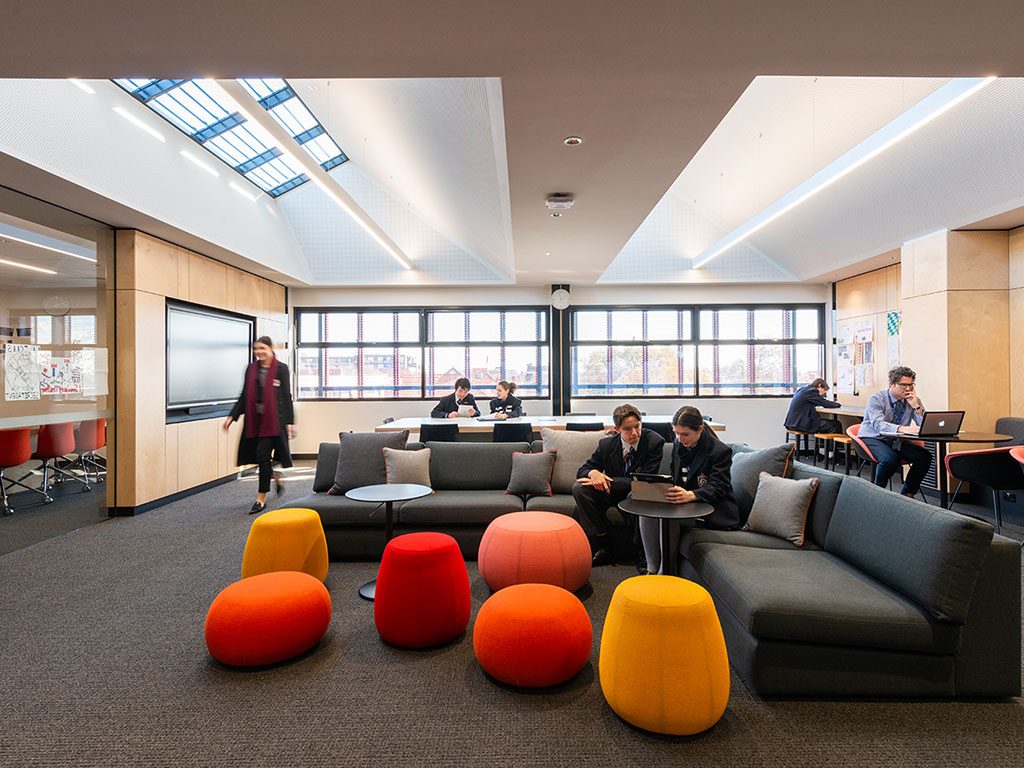 Designed by Hayball, the Roy Hoult Centre is the fourth collaborative project with Prebuilt for Caulfield Grammar.

For its part, having worked on The Learning Project with Prebuilt, the Hayball team had already gained an understanding of the niche skillset and quality of production that Prebuilt could offer in the realm of volumetric prefabricated manufacturing. Hayball Principal Harry Nicholas comments that, having been approached by the school to design the new Roy Hoult Extension, Hayball designed the procurement model to allow input from expert prefabrication contractors early in the process. Prebuilt gained ‘preferred contractor’ status following a rigorous design and tender process.

“The client was on board with the benefits of prefabrication from the beginning and supported the team’s vision, allowing us to design and manufacture in tandem, providing a distinct and high-quality outcome for the school while also ensuring a permanent and landmark building for the campus.”

The materiality of the building comprises a simple steel and glass structure, encircled by a perforated metal screen or ‘veil’ element that provides a singular form and works to protect and lend permanence and mass to the lightweight structural elements behind it. Among the challenges for Hayball was a requirement to design and build in keeping with the existing look and feel of the traditional red brick campus. This was overcome by utilising colouration to the metal screen that deliberately responds to the brick context of the site, producing a lightweight building within an imposing brick and masonry context that closely echoes the colour and mass of the rest of the campus.

Hayball Principal David Tweedie adds: “As with most educational projects, minimising disruption to the school was a critical requirement, which was met by using volumetric prefabricated elements, reducing the impact to the school and site by essentially erecting the bulk of the new building over a single weekend.”

And he notes that there were also constraints created by the building’s orientation (a deep north south site), which were overcome by filtering western light through the perforated metal screen and designing skylights that achieve an even light distribution, reducing glare within the learning environment.

“Documenting the skylight modules within a prefabrication context was a related challenge, overcome by designing the roof elements in such a way that they could be transported on trucks and then easily mounted on site.”

Prefabrication also answered other site issues. “This is a flood prone site; and the challenge was overcome by designing a lightweight prefabricated structure that allows water to flow freely beneath it in times of flood. Other general site constraints were overcome by working around restricted access and existing trees. This suited the idea of prefabrication and construction off site.”

“Thanks to a fully collaborative process between Hayball and Prebuilt plus a very committed and supportive client, this project was designed to fulfil a common vision and has resulted in a contemporary education facility that celebrates the best in design, technology and learning.”■