DEMAND FOR OFFSITE + MMC, AND THE TECHNOLOGIES THAT SUPPORT THEM, ARE ON THE RISE IN MAJOR GLOBAL MARKETS, WHILE IN AUSTRALIA, MOVES TO ADVANCE KNOWLEDGE EXCHANGE AND CREATE INDUSTRY PIPELINE, ALONG WITH INVESTMENT IN ‘CONTECH’ INDICATE A NEW CHAPTER, WRITES BELINDA SMART.

Admittedly talk can be cheap when it comes to ‘disruption’; but there are signs that the global and local markets are poised for another disruptive step change. Demand for a different way of dealing with the construction industry’s challenges is an accepted reality; but now numerous factors including investor interest in digitally driven solutions, point to another turn in the evolutionary wheels.

GLOBAL MARKET PRIMED FOR GROWTH
According to a report by McKinsey published in June ‘Modular construction: From projects to products’, on modest assumptions of penetration, the market value for modular construction in new real-estate construction alone could reach $130 billion in Europe and the United States by 2030.

The report also says Australia’s East Coast, along with Germany’s major cities, the southern UK, and the US West Coast are ripe for offsite growth due to shortages in housing and skilled labour. And it says more investment in and uptake of digital technologies is consistent with and a contributor to the growth of modern methods of construction. All this encompasses “a change in mind-set among construction-sector CEOs, as many leaders see technology-based disruptors entering the scene—and [realise] it may be time to reposition themselves.”

And it also paints a clear picture of “anticipated disruption” that makes the offsite sector of particular interest for investors. “After decades of relatively slow change, an at-scale shift to modularisation—alongside digitisation—looks likely to disrupt the construction industry and broader ecosystem.”

“After decades of relatively slow change, an at-scale shift to modularisation—alongside digitisation—looks likely to disrupt the construction industry and broader ecosystem.” Modular construction: From projects to product, McKinsey, June 2019.

A July report from MarketsAndMarkets closes the loop around The Asia Pacific:

“…the tremendous growth of the construction opportunities in countries such as China, Australia, India, Japan, Korea, Thailand, Malaysia, and Indonesia is further projected to boost the growth of the modular construction market in the region.”

TECH + INVESTMENT APPETITE CHANGING THE GAME
In early July, the US market saw Autodesk announce its latest investment, in Californian prefabrication specialist Factory_OS. The investment will support the development of a space dedicated to education and research on industrialised construction. Autodesk President and Chief Executive Officer Andrew Anagnost commented:

“Building on Factory_OS’ existing use of our tools, we’ll work together to identify new software collaborations to streamline the design, fabrication, and supply chain management of offsite construction.”

THE AUSTRALIAN PERSPECTIVE
Australia, along with Singapore and the UK, is cited as a major market now making offsite construction “a strategic priority” in a recent Boston Consulting Group report ‘The Offsite Revolution in Construction.’

While Australia lacks the scalability and large scale investment opportunities of the US, government here has sent a signal of support for the sector with an announcement of plans for a new collaborative lab, the Advanced Manufacturing Growth Centre (AMGC) Prefab Innovation Hub initiative recently announced by the Federal Minister for industry. Dr Jens Goennemann, Managing Director of AMGC, a speaker at the 2019 prefabAUS Conference, confirms the AMGC’s feasibility study for the initiative will be completed by the end of January 2020. “The innovation hub is an additional and positive opportunity to expand the manufactured buildings eco-system within Australia, while supporting new technologies and innovations.”

TECH START-UPS INDICATE GROWTH
Adoption of construction technology, ‘ ConTech’, to reduce costs and increase productivity indicates a growing sector, as confirmed by Shane Oliver, Head of Investment Strategy and Chief Economist at AMP Capital, who told Built Offsite: “There’s no doubt that investment in the technology that supports modern methods of construction is indicative of growth in that sector in Australia.”

“There’s no doubt that investment in the technology that supports modern methods of construction is indicative of growth in that sector in Australia.” Shane Oliver, Head of Investment Strategy and Chief Economist at AMP Capital. 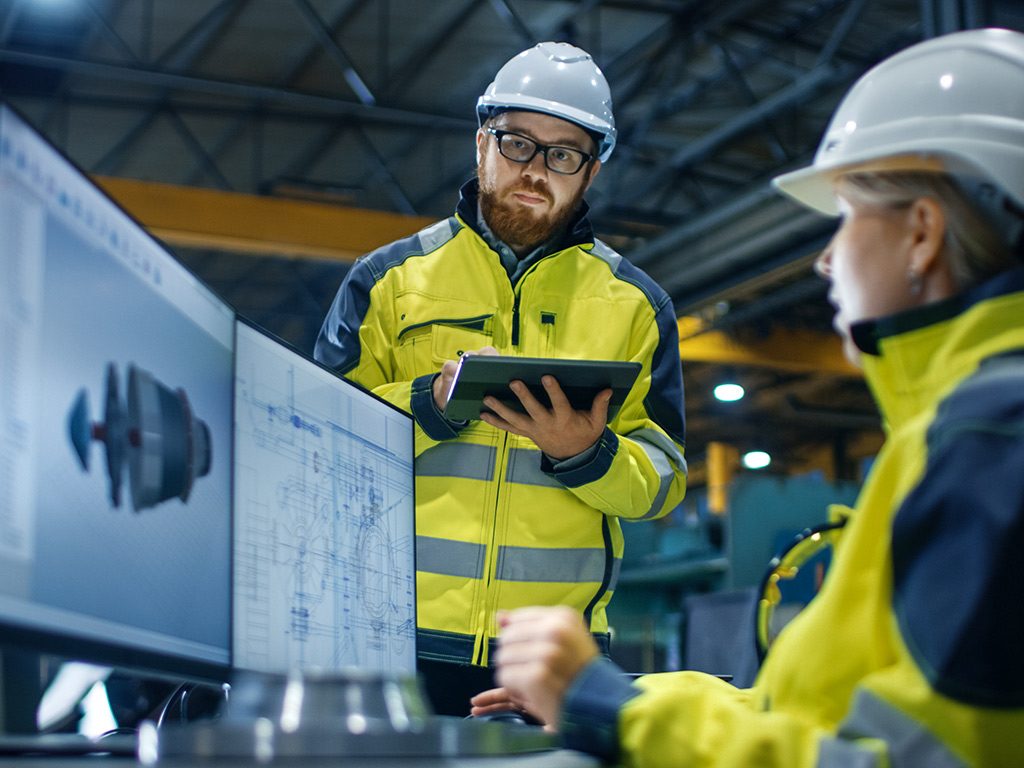 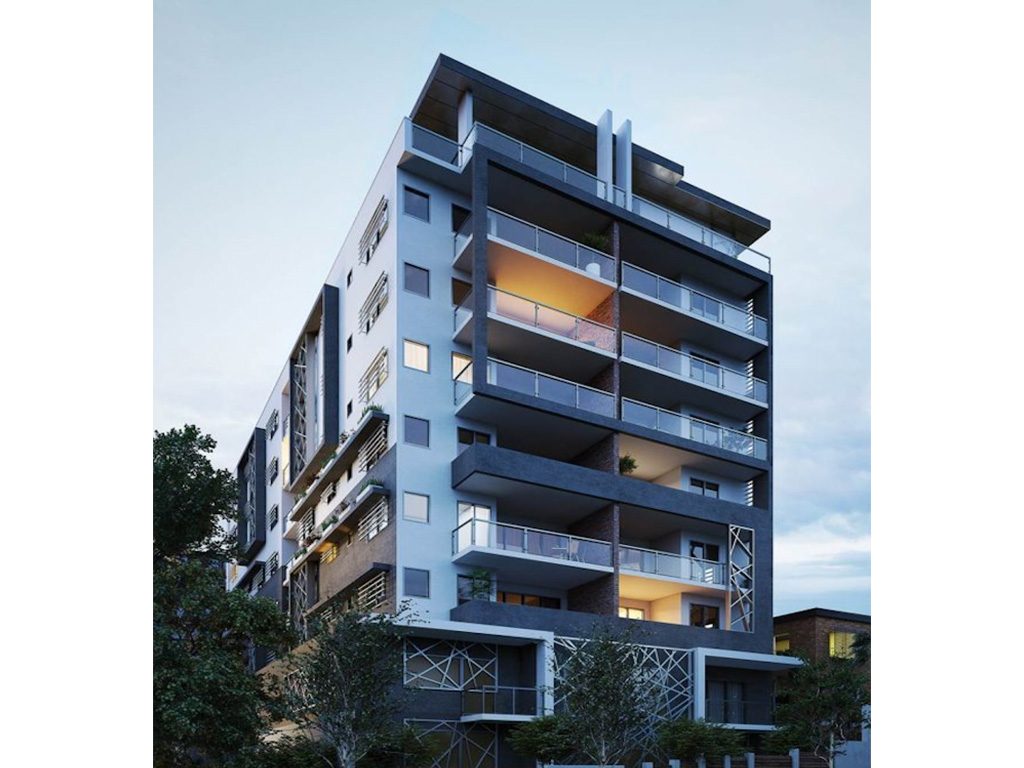 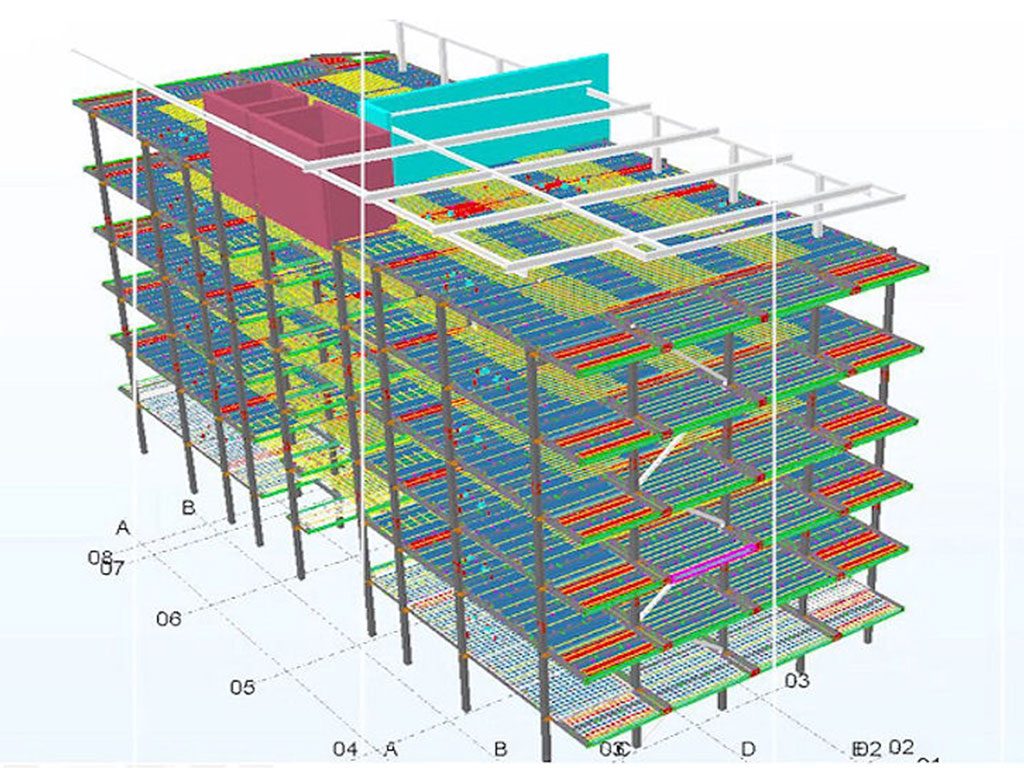 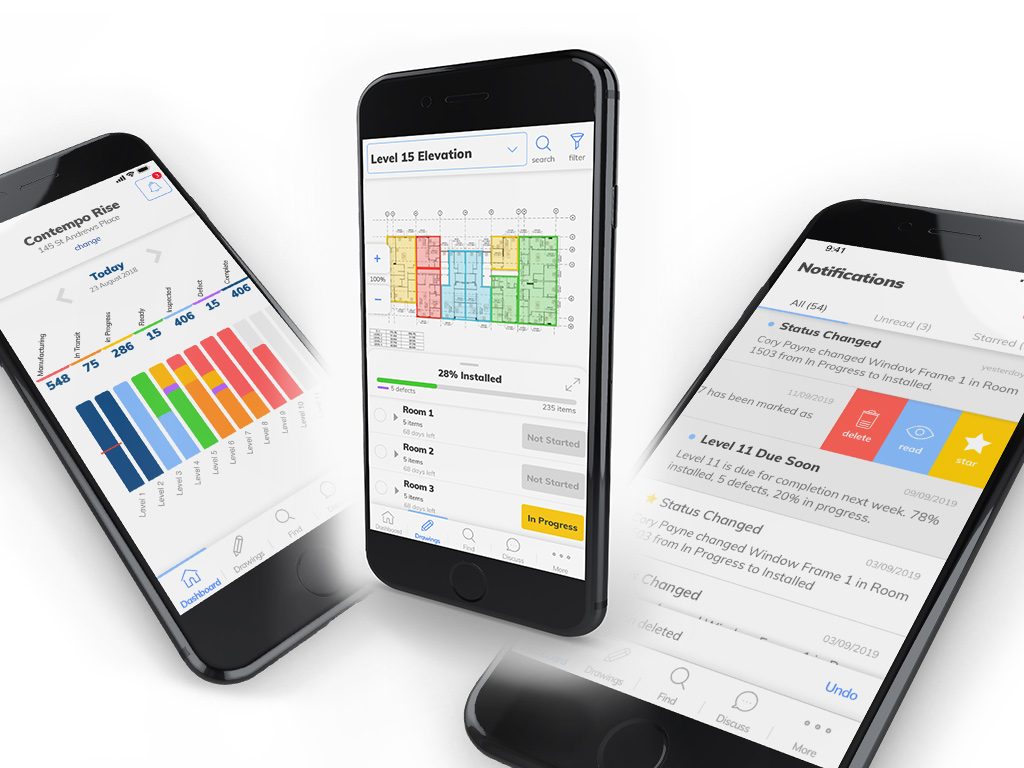 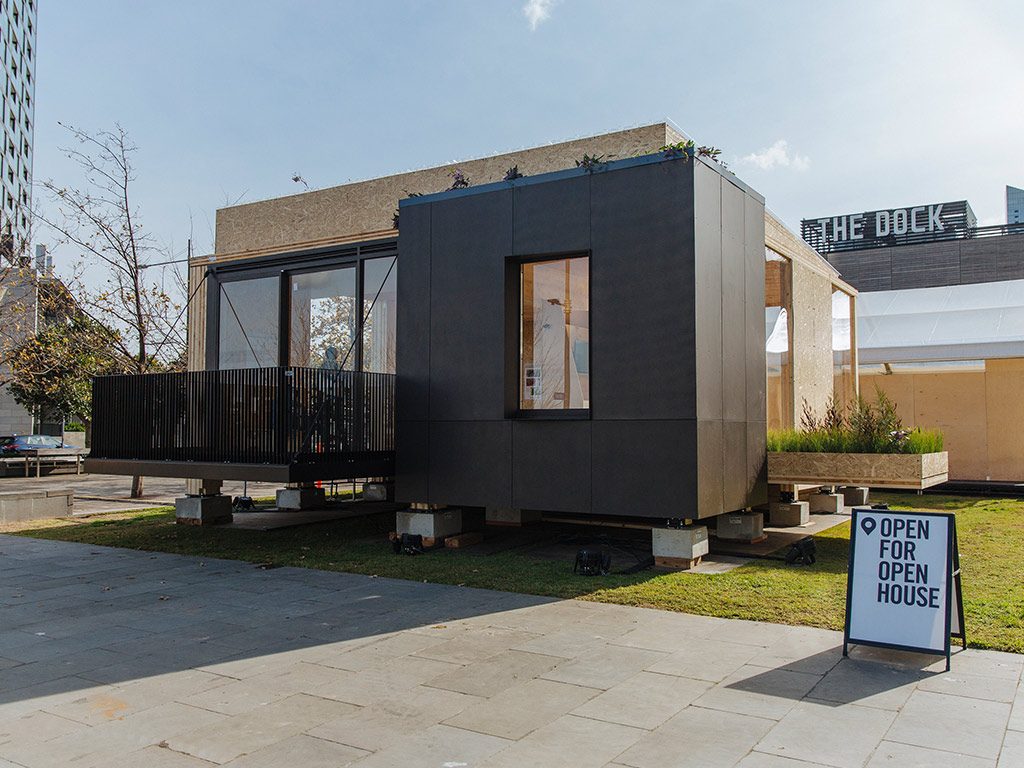 *IMAGE 2: “DESIGN FOR MANUFACTURE”: A COMPLETED APARTMENT TOWER USING PT BLINK TECHNOLOGY IN SPRING HILL, QUEENSLAND. PT BLINK’S SOLUTION IS USED TO BUILD THE BACKBONES FOR MULTI-STOREY BUILDINGS, USING STEEL COLUMNS AND STEEL TRAYS MANUFACTURED OFFSITE. THE TECHNOLOGY HAS BEEN PROVEN ON THE COMPLETION OF SUCH BUILDINGS IN JUST OVER 10 DAYS.

PT BLINK
Founder and CEO Murray Ellen calls PT Blink “an overnight success that was 30 years in the making,” Late last year the company raised just over $800,000 in an equity crowd-funding campaign to expand its operation internationally. With plans to go public in the coming months, PT Blink elected to crowdfund its expansion after meeting road blocks from the traditional construction industry. A significant percentage of its investors were under thirty.

PT Blink Technology can be used to build the backbone for multi-storey buildings, using steel columns and steel trays manufactured offsite and then strengthened using post-tensioned steel cables. Other manufactured components from a community of suppliers can then be added. Among numerous completed projects is a seven storey Brisbane apartment building, finished in 11 days.

Murray Ellen has a background in structural engineering, (the PT in PT Blink stands for post-tensioning steel technology). Having worked throughout Asia, from Hong Kong to Malaysia and China, he says he began to think of solutions to construction problems that lay principally in a “design for manufacture” approach, rather than in traditional construction. The speed and efficiencies offered by PT Blink put it in a position to compete effectively with overseas prefabrication suppliers, he adds.

PT Blink has plans to leverage a relationship with Trimble, a technology company specialising in solutions that assist users connect the physical and digital worlds. It also has a relationship with Queensland based robotics company IR4 which automatically absorbs Trimble inputs.

“One of the messages we want to get out there is that manufacturing is alive and well in Australia. And the model we’re deploying is essentially turning construction on its head.” Murray Ellen, Founder + CEO, PT Blink.

MATRAK
Brothers Shane and Brett Hodgkins are co-founders of materials and project tracking app Matrak, whose first iteration was the result of Brett’s role at the family window installation business, to track when windows arrived on site. The app has now evolved into a network that encompasses installers, manufacturers, suppliers and the full spectrum of construction delivery contractors.

Last year Matrak closed a $765,000 seed funding round, including investment from the former chair of construction software company Aconex, Simon Yencken. This year it raised $3.1 million from existing investors, as well as Hickory, VC firm Our Innovation Fund, Superseed (Reece Plumbing’s venture arm), and execs from two of the biggest Australian builders.

The company’s clients include Hickory, which has deployed Matrak for offsite elements such as bathroom pods. Matrak also has plans to work with construction company Mace in the UK, which plans to grow its use of offsite construction. Hodgkins confirms a new scheduling app has been used on various projects, including tracking bathroom pods on a student accommodation scheme at 500 Swanston Street in Melbourne.

“There’s an explosion of ‘ConTech’ companies underway at the moment that are all designed to help innovate the way buildings are delivered,” he says. “A lot of the big building companies are creating roles for directors of innovation and they’re very interested in what this kind of technology can do.”

“It does feel as though other major markets like the US and China are better at raising investment, but there is certainly innovation happening here.” Shane Hodgkins, Co-founder, Matrak.

YNOMIA
Ynomia technology has relevance in light of growing concerns over the stability of apartment buildings. Using sensor technology and Bluetooth to track items across a broad construction process, it can track the provenance of materials and being alerted to breaks in a usual sequence of events so project managers can be alerted to potential problems.

Co-founder, Matt Barbuto, believes Ynomia has a role to play in offsite construction.

“The more construction activity moves away from the job site through offsite construction, the greater the importance of creating visibility for construction project teams, across the disparate and interdependent ‘production’ locations.”

“The more construction activity moves away from the jobsite through offsite construction, the greater the importance of creating visibility for construction project teams, across the disparate and interdependent ‘production’ locations.” Matt Barbuto, Co-founder – Ynomia.

Ynomia technology was used by a team on the Future Building Initiative based at Monash University. Rachel Couper, Project Manager and Postdoctoral Researcher, confirms it has application for offsite construction.

“We recently collaborated with Ynomia on the delivery of a 1:1 scale apartment prototype we developed with our industry partners at Lendlease through the Innovation in Advanced Multi-Storey Housing Manufacture CRC-Project. The scale of the project provided an excellent opportunity to test the proof of concept of Ynomia’s product offering and its ability to meet the complex demands of supply chain management in industrialised construction. We captured a broad range of very useful data and we’re looking forward to collaborating with them on future iterations of the project.”

TOOLS FOR A RE-FRAMED FUTURE?
New technology start-ups are just one signal of a change that requires many moving parts to align, but they do indicate shifting demand towards solutions that offer greater efficiencies. Back to the June McKinsey report, which confirms many of the consultant’s construction, real-estate, and infrastructure clients are already adopting a more industrialised model, or developing strategies on how they can do so. These are “promising signs of a trend that we believe has staying power and growth potential.”

Shane Hodgkins, Co-founder, Matrak, comments: “In Australia many companies are operating on very thin margins with high upfront costs. There’s a case for offsite construction and this new breed of technology to offer new solutions that ensure that we don’t get left behind in relation to global competition.”

The last word might go to PT Blink’s Murray Ellen, who says the company’s young-minded shareholder base indicates both disruption and a new construction landscape. “We found that clients and end-users loved what we were doing; builders and architects didn’t. It’s easier to get younger people with a different mindset to invest in tech-driven enterprises. We decided to go out there and target our own funding demographic. We essentially found 300 of our own shareholders who were more comfortable with disruptor models. But we’re not a start-up just for the hell of it; this thing is coming.”

“It’s easier to get younger people with a different mindset to invest in tech-driven enterprises. We decided to go out there and target our own funding demographic. We essentially found 300 of our own shareholders who were more comfortable with disruptor models. But we’re not a start-up just for the hell of it; this thing is coming.” Murray Ellen, Founder + CEO, PT Blink.■