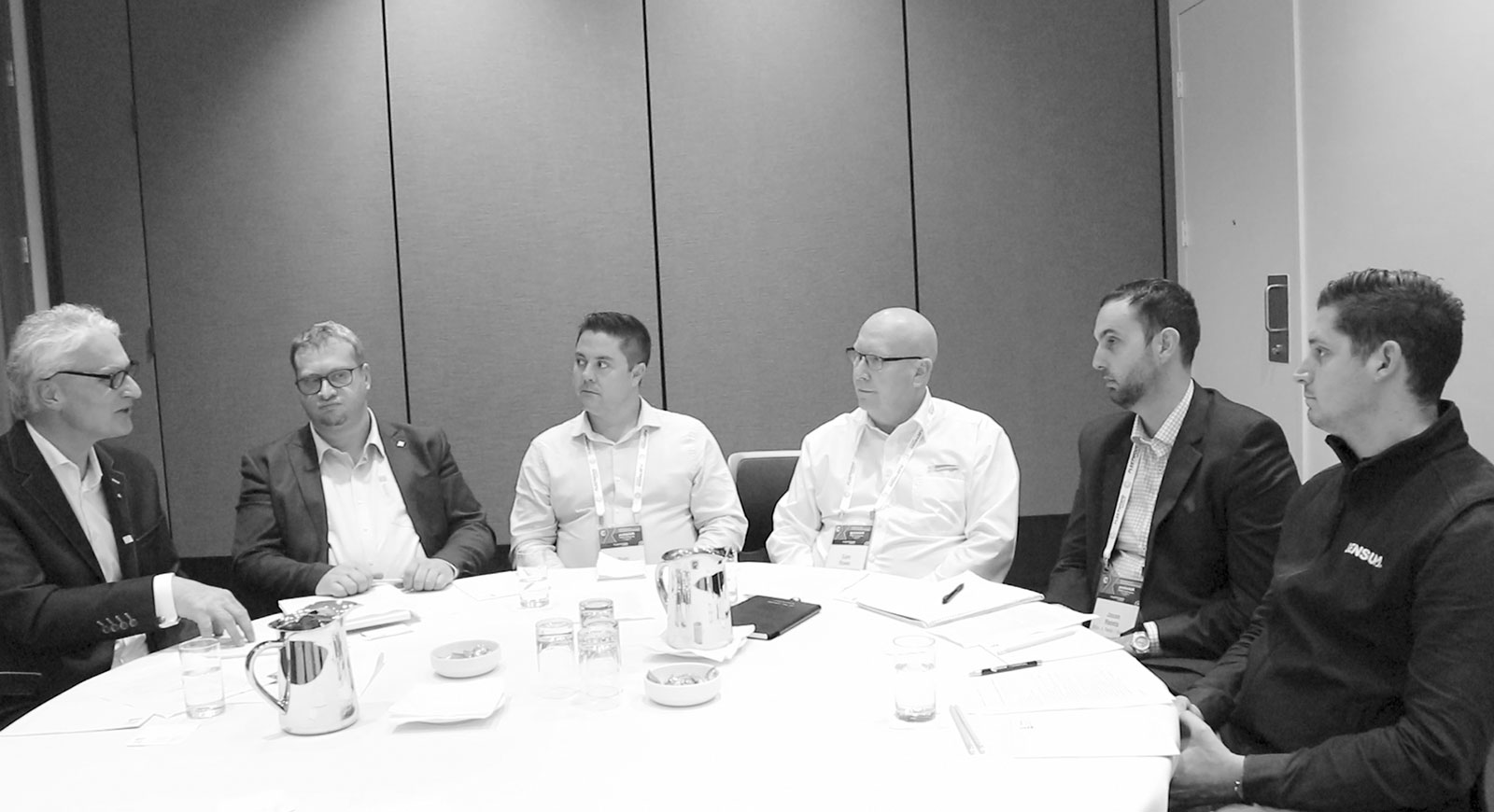 MICHAEL: Hello, I’m Michael Dolphin, Publisher of Built Offsite magazine. Welcome to the latest edition of the Built Offsite Forum, sponsored by Sensum. I’m pleased to introduce our panellists, who’ll be sharing their insights on the topic of timber processing and machinery solutions. Ryan, perhaps we can start with an overview of your activities in this space?

RYAN: I represent Weinmann Equipment which is part of the Homag Group. Weinmann offer systems and solutions for both lightweight timber panelised products and also CLT processing, also value-adding to the sort of panelised systems adding different types of claddings. We also have our own proprietary software which can link up these systems together, capturing lots of valuable information, around maintenance and production planning.

SAM: I’m Sam Rowe from Hundegger. We’ve got a very strong tradition working with solid timber in Europe and, of course, in Australia. In Australia and New Zealand, predominantly, we’ve been in the timber framing area, truss and frame processing. We have a range of CNC for that type of work but also quite a comprehensive range of machinery for mass timber for glulam and for CLT.

JASON: My name is Jason. I’m from Bliss and Reels. We’re an Australian machinery service and supply company in operation since the 1940s. We’re the local partners for Randek who are a Swedish pioneer in offsite manufacturing technology dating back to the 1940s doing computer-connected equipment since the early ‘80s.

MICHAEL: I’d be very interested to hear from the panel about comparative analysis between companies who did adopt this kind of technology and those who didn’t.

SAM: I’ll give you one example without mentioning a customer. The hardware timber industry in Victoria, in particular, has got a very long history and has been under a lot of pressure over the last 10 years in particular, but we do have a couple of instances where we’ve had people who started off in sawmilling and moved into the value-adding part of sawmilling, the vertical integration of value-added products, and then gone into truss and frames, for instance, and then right through into panelisation. If you have a look at the businesses that have done that sort of vertical integration by using the CNC technology, they’re still around and they’re strong. If you look at the types of businesses that did not invest in that technology in that same sector, for instance, in Victoria, there are very few players left in that industry.

MICHAEL: Is it a fair remark that at some stage, automation will make parts of the industry redundant?

SAM: I think that there’s always going to be an opportunity for both levels. It’s certainly going to be the people that are in large mass production and they will only stay effective and stay competitive with automation. At the same time, there will also be people that are working in more bespoke environments that will be able to work on a lower level of automation, but to be able to be very customer-focused and to be able to be very, very agile and to respond to bespoke requirements from new customers. I think there’s still room for both, but certainly, automation is going to grow.

MICHAEL: I think one of the really challenging questions for the panel members might be around how you educate a potential customer as to the real advantages of adopting this technology.

RYAN: I think a lot of the road blocks are from the industry itself. If we look at the traditional way we’re building at the moment; a developer sells the land and possibly also the product that goes in the land, the house, but he doesn’t actually build everything. Someone else comes along and builds that.

When we’re going to look at systems like this, the units of measure for costing are based around this traditional build method. When you’re going to a prefab environment, ways that those costing measures are used, they need to be totally turned on their head because they don’t take into account all the variations.

JASON: The difference between, say, Australia, and a European business model in the building industry is that in Europe there’s a lot of vertical integration. One of the problems you’ve got here is that you’ve got a player that’s used to basically just being project manager. The idea of owning the machinery and the process, that’s a foreign concept.

JASON: If we talk about automation and we talk about high end automation, then we’re talking about high capital investment, and the only way that you’re getting that is from volume. If you talk about the game changing stuff that will change it for the consumer, it’s really coming along when someone is manufacturing in volume. It’s not someone that makes 10 houses a year.

MICHAEL: Do you find that a portion of your clients are start-ups or people entering from outside the industry? Are they more prepared to invest in this idea?

RYAN: I think any of the early adopters of this kind of building, I think they all fall in the category of start-up whether they’re pre-existing builders or not because it’s a new way of building and they have got a really steep learning curve to go through.

MICHAEL: Is there one area in which you see your level of machinery being deployed successfully? Where are the greatest efficiency dividends?

RYAN: The buzz at the moment is mass timber. Mass timber is certainly seeing huge efficiencies. Some of these buildings, they’re 9-storey buildings and they’ve got five guys assembling all the panels.

SAM: There’s still a lot of variation in the application for the machinery as well. I think one of the things that is going to change in that area, though, is the skills in the factory and the skills of the people that are operating the machines. The machines are definitely getting smarter and easier to use.

MICHAEL: I think that’s an interesting point in that the skills base that is required to really underpin this entire industry isn’t there. The matter of software in terms of how your machines talk to other machines, do you think that’s been successfully implemented? What were some issues that you faced?

RYAN: I think for all of the type of machinery that we offer there are only a handful of programs that can output a file type that we can all read. They’re not overly supported in Australia.

SAM: Some of the larger players have got front end operations that manage all that, but there are also external third-party suppliers that can do the integration between design software and a machine file. Those services are excellent because they allow the business to take advantage of the technology without having to invest so much in the front end. Later they can grow into it and they can bring their own people in. There are services out there to do it. But I think one of the other areas where software is—and we all have, all the people here at this table, have got variations on it which is going to become more important—that is the integration of machinery units into systems rather than just the software that we use or that we use from a design to convert into a machine file, but how we link the feeding in the machine, the transport of timber, the processing on the machine, those which are more proprietary systems that we all have but they are becoming more important.

MASSIMO: I agree, in general. One thing is to link your architectural software to the machine that produces the machine code. One thing is that is to run the factory and keep control of everything that happens in the factory. That is the challenge because it requires a very high level of customisation and a very deep conversation between the end user and the supplier. That is a challenge, but it’s also the challenge that then points to what we call the industry 4.0 – making the industry more digital, more integrated.

MICHAEL: Can I ask each you for a couple of key takeaways from this session?

MASSIMO: In general, the benefits are quite clear, and we have all expressed those benefits on this table. I would add to that also safety, not just onsite, but also in manufacturing process.

RYAN: It’s very important to have a very clear business model and know exactly what you want. At the same time, you still need to remain flexible.

SAM: I agree with Ryan’s comments. I would say keep it scalable and be able to respond quickly and take change on quickly.

JASON: I would just agree with that. It starts with the business model. That’s the first thing that the whole system revolves around; having an appropriate business model.

MICHAEL: Thanks very much for your thoughts and also making the time to be a part of today’s forum. ■