WITH INTEREST BOOMING IN NEW INFRASTRUCTURE DEVELOPMENT AS AN ECONOMIC ENABLER, THE COUNTRY IS WITNESSING A ARRAY OF NEW MODULAR APPROACHES TO ACCELERATE PROJECTS AND UNDERTAKE WORKS IN MORE CONTROLLED WORK ENVIRONMENTS, WITH STEEL PLAYING A CENTRAL ROLE.

The move is occurring as industry engagement with the Australian steel industry’s new National Structural Steelwork Compliance Scheme (NSSCS) ramps up, driving the quality of prefabricated steelwork components. Nowhere are these trends better illustrated than with major bridgeworks where the very reason for building them naturally lends itself to maximising offsite modular construction to ease erection on typically tricky terrain.

One needs to look no further than the work being undertaken by the first two steel fabricators to be independently certified to Construction Category 3 (CC3) of the NSSCS over the past year, with CC3 certification for more complex structures, such as bridges. The Construction Categories align with the structure importance levels of the National Construction Code (NCC).

The CC3-certified main plant of Civmec Engineering and Construction in Perth is supplying massive girders that facilitate the installation of a major new crossing over the Collie River in the South-Western region of Western Australia from terrain unable to support heavy cranes, cutting almost two months from the construction time of the project, currently expected to be completed early 2018.

There were many challenges faced during the design phase of this bridge with the site being a greenfield and ground conditions not allowing heavy crane/machinery haulage being the biggest drivers in the decision-making process. Carrying out construction within a residential area meant that managing adverse social impacts was also a priority. Certified fabricators facilitate clever modular bridgeworks (27-11-2017) 2 To ensure that community disturbance was minimised and due to the poor ground conditions on the southern side of the river, it was decided to incrementally launch the bridge superstructure from the northern side of the river. Usually with a bridge of this type, the steel beams are pushed out over the piers and concrete deck poured when the steel beams are in place but for this bridge, pouring the deck prior to launch meant a much more efficient construction process.

“The bridge superstructure consists of steel beam girders prefabricated and delivered to site and placed on the launching pad. The reinforced concrete deck was then cast on top of the beams along with the guardrails installed prior to launching the bridge superstructure from the bank out over the piers.”
Drawn from the Bridges Supplement, December 2017 edition, Steel Australia.

Launching girders with the concrete deck cast is not commonly done in Australia and this structure is only the second of its kind for Main Roads WA. The girder sections were transported along Forrest Highway to access the bridge site via a temporary road.

Apart from the first 26 metres of the leading span, the superstructure was launched with the in-situ concrete deck cast and guardrail installed to reduce post-launch construction activities. Steel beams were more favourable mainly due to their significantly lighter weight, ability to span longer lengths without support and being easier to launch than concrete beams, lowering the expense of piles and pile caps required to support the superstructure.

The new pedestrian and cyclist bridge being built at the high-profile location near the Western Sydney hub of Penrith is the first major project being supplied by Civmec at Tomago in Newcastle since it recently took over the former Forgacs shipbuilding site, with the site becoming CC3-certified as the project commenced rolling out. 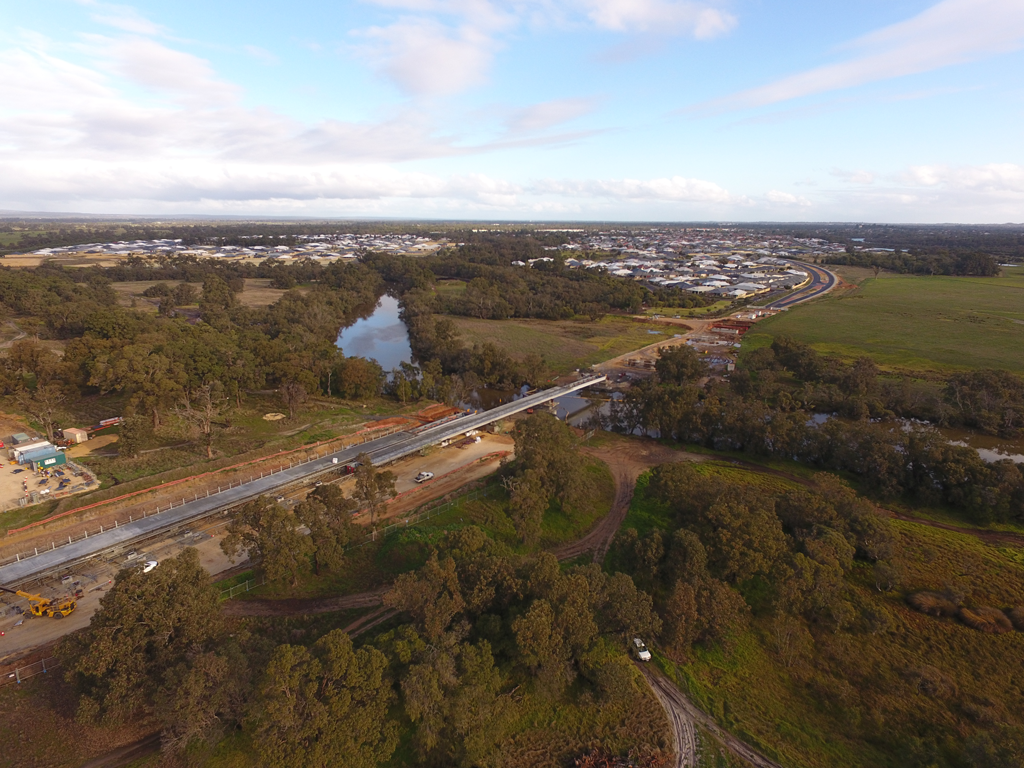 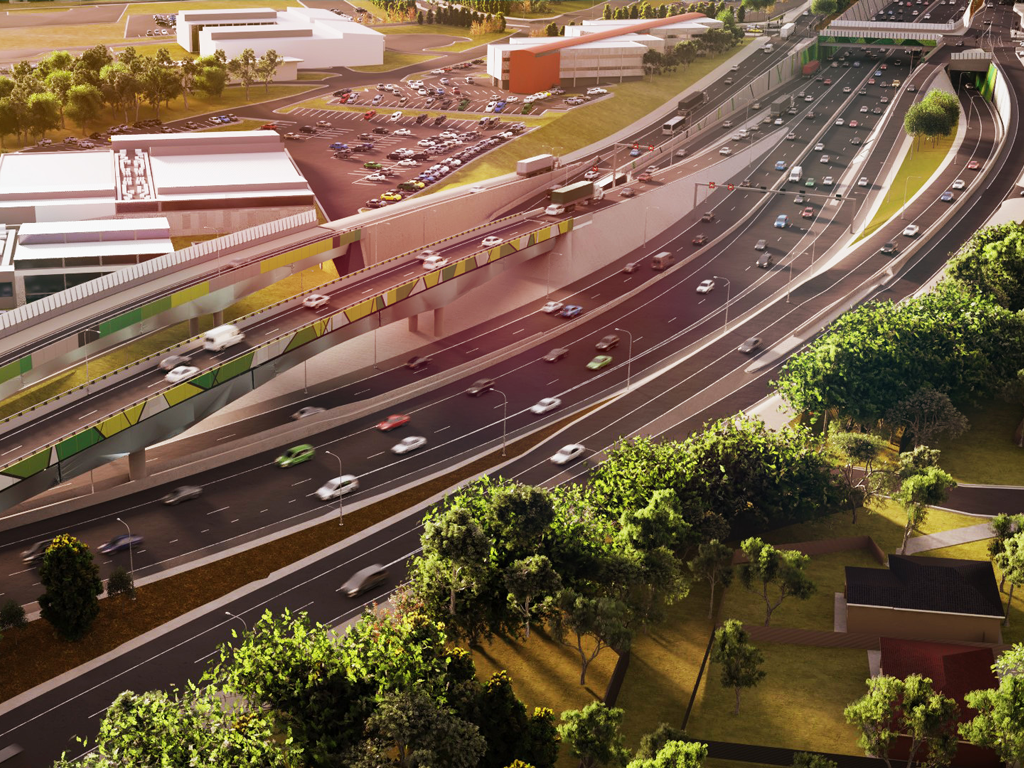 Darlington Interchange: the two 3000-tonne 180-metre-long bridges are being assembled and fitted out offsite.

It is believed the 200-metre steel truss at the heart of the new crossing’s superstructure will be the longest free-span steel structure of its type in Australia. A design change made during planning is also keeping the overall cost down when compared to the original curved design with its more efficient structural design reducing the amount of steel needed by 20 per cent.

The original concept design of the bridge for NSW Roads and Maritime Services (RMS) considered a curved design, but was revised to be based on a straight triangular truss with a gentle vertical curve during the detailed design phase to provide a large span with generous width and unique structure.

The considerable temporary works structures in Tomago comprise 120 tonnes of jigs, necessary as a safeguard of dimensional accuracy. The jigs are set out for fabrication to build the first half of the bridge, then flipped around to build the second half in the same jigs using the same set out points.

The final bridge structure is being assembled in the 65-metre long workshop which has been purpose-built by Civmec for the site assembly of the bridge sections and includes two brand new 20-tonne gantry cranes. The complexity of the onsite assembly also required the fabrication and installation of engineered collapsible access platforms. Certified fabricators facilitate clever modular bridgeworks (27-11-2017) 3 In general, the structural steel of the bridge is being assembled in eight bays – 25 metres long by eight metres wide with each bay split by bottom floor and top truss due to the height restrictions with assembly, fabrication, welding, blasting and painting of the various activities associated with the fabrication of the truss segments.

South Australian CC3-certified steel fabricator, Bowhill Engineering has successfully delivered the first stage of the superstructure for two bridges that are being constructed adjacent to the road and lifted into position.

In what is believed to be an Australian first and part of the $620 million North-South Corridor Darlington Upgrade Project, the two 3000-tonne 180-metre-long bridges are being completely assembled and fitted out offsite before being moved into place via Self-Propelled Modular Trailers known as SPMTs.

During the main contractor tendering phase, Bowhill was able to help the Department of Planning Transport and Infrastructure work out some critical constructability feasibility checks.

That involved helping to refine some of the connection, welding, rigging and splice location details before the bridge design was finalised, ultimately resulting in a better engineered outcome as those trade-specific considerations are built into and fully considered in the original design.

Transportation of the massive girders to the interchange set-down location also tested Bowhill’s mettle. Girder beams were transported to site in pairs as convoys to reduce disruption to traffic and increase efficiency. Engineered bolsters were designed, detailed and fabricated to suit both the specific ‘jinker’ trailers being used and the girders that were being moved that ensured a safe and efficient loading process at Bowhill and transport on the road during the moves.

The up-to-date register of NSSCS-certified steel fabricators can be found at:
http://www.scacompliance.com.au/certified-companies/

This article is drawn from the dedicated Bridges Supplement in the December 2017 edition of the Australian Steel Institute’s flagship news publication, ‘Steel Australia’.■ 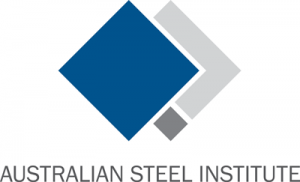