PRECAST CONCRETE: MUSIC FOR THE EYES

THE INTERNATIONALLY-RENOWNED ST GEORGE’S CATHEDRAL CHOIRS IN PERTH ARE RECOGNISED AS TWO OF AUSTRALIA’S FINEST CATHEDRAL CHOIRS AND THEY NOW HAVE A NEW HOME THAT IS BEFITTING OF THEIR EMINENT REPUTATIONS, WITH PRECAST CONCRETE KEY TO ENGENDERING GROUND-BREAKING AESTHETIC AND FUNCTIONAL OUTCOMES.

The Cathedral’s new Song School is set between the celebrated 1917 Burt Memorial Hall, the 1888 Cathedral,  and the 1859 Deanery. The $4.8 million development is a two-storey precast concrete structure that features a striking white façade, two tuning fork spires, and lancet-inspired arches.

In recognition of its splendour, the Song School project recently won the prestigious Kevin Kavanagh Trophy at the biennial Concrete Institute of Australia’s Awards for Excellence. It also won the prize for its Commercial Buildings category, as an ‘outstanding contribution to the quality of concrete in Australia’.

National Precast’s Chief Executive Officer, Sarah Bachmann, believes winning the awards is a remarkable achievement for not only the project, but also for Australia’s entire precast concrete industry.

“Australia is renowned internationally for the quality of its architectural precast and the Song School is a magnificent example of that. It is befitting that two of our members, SA Precast and J Woodside Consulting, have been recognised for their involvement,” she states.

BRINGING A UNIQUE BRIEF TO LIFE

Designed by Palassis Architects, the project’s unique brief demanded that the Song School seamlessly fused with its surrounding 140-year-old architecture.

To achieve this architectural vision, Adelaide-based company, SA Precast, was contracted to manufacture a varied collection of white precast concrete elements for the project. These included curved beams for the rehearsal room, two precast concrete spires, three lattice feature wall panels, the first storey supporting columns for the second storey shells and the shells for the second storey that form the colonnade. The elements were manufactured with a white cement and featured a lightly textured off-form finish. Bachmann describes the finish of the project as “simply stunning.”

“The array of white elements creates an almost ethereal landscape and showcases the ability of prefabricated architectural precast to achieve what is a splendid vision that has been imagined by the architect,” she reveals.

“The array of white elements creates an almost ethereal landscape and showcases the ability of prefabricated architectural precast to achieve what is a splendid vision that has been imagined by the architect.” National Precast Chief Executive Officer Sarah Bachmann.

Reflecting the Cathedral’s existing lancet windows and preserving the view of the revered Ascalon sculpture in the forecourt, the Song School successfully complements the adjacent heritage buildings. Partly-subterranean, it has a minimal footprint and maximises existing sightlines. 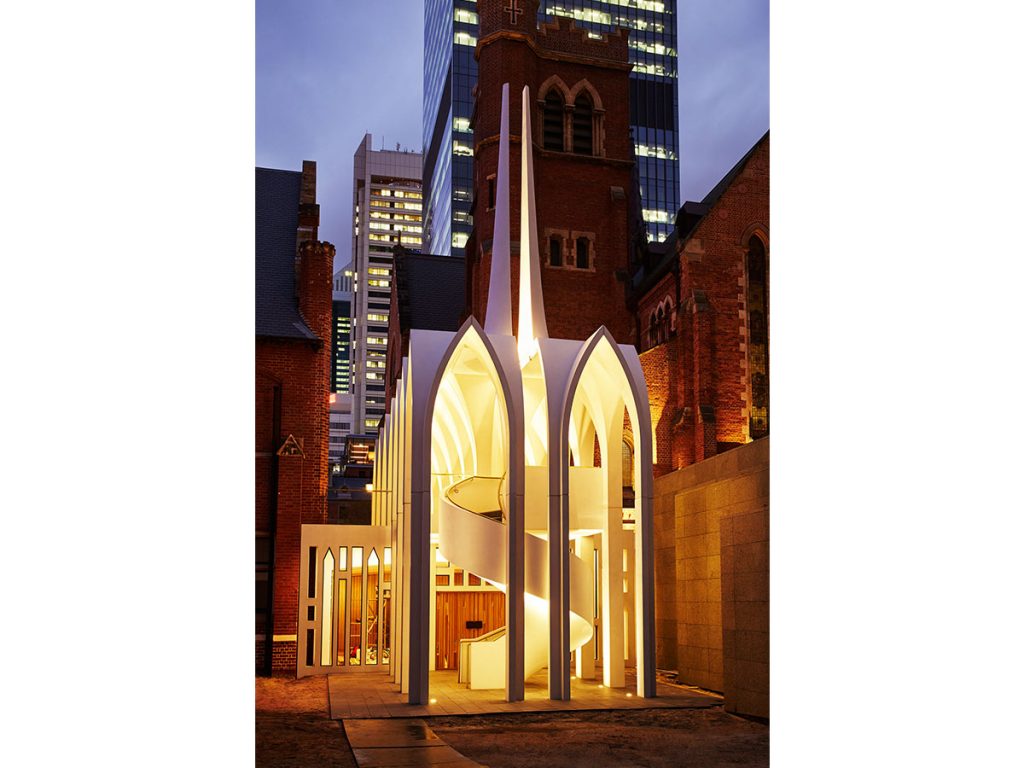 Architectural vision: the scheme is a showcase for precast concrete. 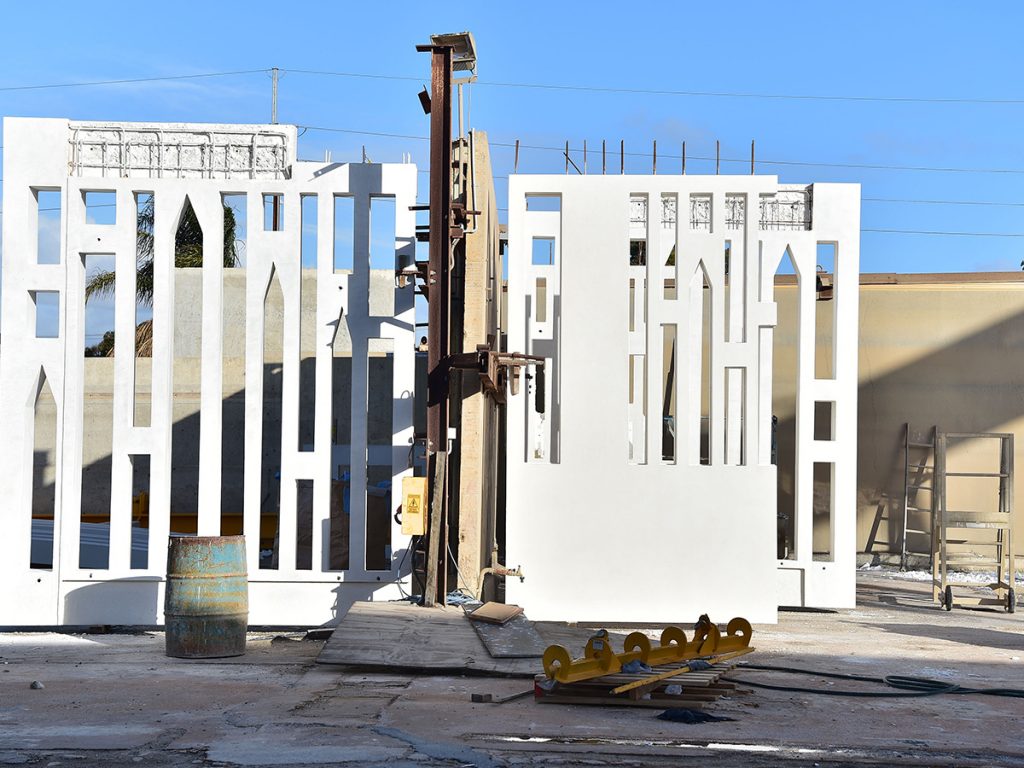 The chapel’s elements were manufactured in white cement and featured a lightly textured finish. 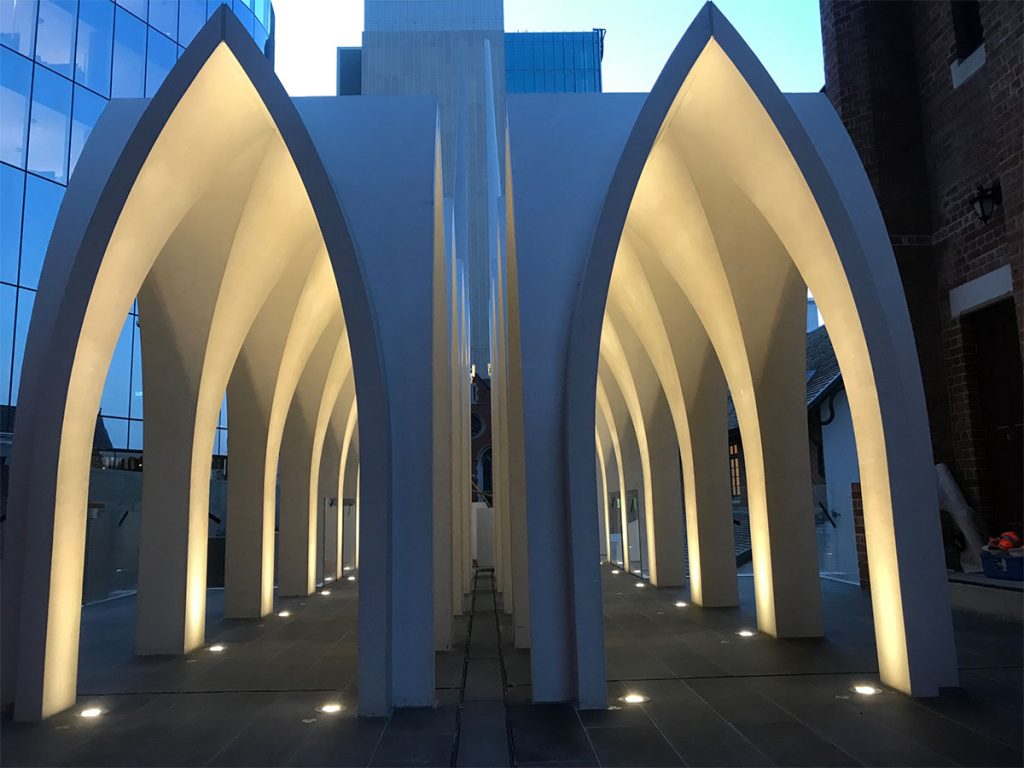 “Ethereal landscape”: the new structure makes a bold statement while complementing its surroundings.

As with any project of such intricacy, there were challenges along the way. According to Bachmann this is where early involvement by the precaster can overcome hurdles and indeed improve outcomes.

“Time and time again I hear of projects that have had their construction programmes shortened, or costs saved, or ingenious architectural solutions developed. The common thread for many of these has been where the architect, head contractor or engineer have consulted with the precaster early on in the project,” she says.

With regards to the precast concrete for the Song School, the challenges spread across the design, manufacture, transportation, and erection of the elements.

SA Precast’s Managing Director, Claude Pincin, explains. “To achieve the required concrete cover and allow for transportation across the Nullarbor Plains to Perth, the initial 70mm design for the vaulted units was amended to a thicker 135mm thickness with revised connections and 10mm reinforcement.

“Special formwork was made in Melbourne using computergenerated profiles. So the spires could be erected and fixed in position before lining and levelling, a semicircular base plate was cast into the slab beneath the spires with bolts and starter-bars.”

The restriction of the tight inner-city site posed an additional challenge for the installation process. This meant that all precast concrete units had to be lifted approximately 60 metres from the truck to be placed in their final position.

As part of the erection design, J Woodside Consulting designed special purpose-made lifting frames for the vaulted units and spires. Principal John Woodside was involved in the temporary bracing and erection of the precast units, and says it was an intricate process.

“This involved designing special lifting frames that allowed the units to hang vertically during erection,” he explains.

Bachmann believes the award-winning outcome of the Song School is a testament to the quality of precast concrete that her organisation’s members produce.

“Specialty Architectural Precast, known as SA Precast, is one of our oldest members and one of Australia’s leading architectural precasters,” she says.

“We are delighted they have won these awards as recognition of their outstanding achievement for the Song School project.”

The Song School project has not only enriched Perth’s CBD with a beautiful and contemporary structure for the sublime voices that come from within; it also showcases precast concrete’s ability to create high quality and complex construction.

“The aesthetic beauty of the Song School is a vision to behold. It has certainly pushed the boundaries of precast concrete and is a testament to what off-site prefabrication can achieve when minds come together,” Bachmann says.■

“The aesthetic beauty of the Song School is a vision to behold. It has certainly pushed the boundaries of precast concrete and is a testament to what off-site prefabrication can achieve when minds come together.”  National Precast Chief Executive Officer  Sarah Bachmann. 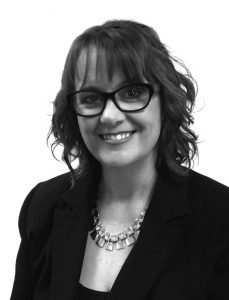