Please turn your device to portrait.
CONTENTS
FEATURE Subscribe to Built Offsite_Monday
PAGE 21 OF 39
Issue 04
BUILT OFFSITE CONTACT US
FINANCE AND THE OFFSITE SECTOR: GRAPPLING WITH THE...
FINANCE AND THE OFFSITE SECTOR: MAKING AFFORDABILITY FEASIBLE
MODULAR CONSTRUCTION CODE BOARD HANDBOOK A GUIDE TO...
Issue 04
Big World Homes: aiming to bridge the gap from renting to owning.

With the phrase ‘housing affordability’ acquiring increasing currency and urgency in recent years, Beverley Johanson investigates how the concept can be funded and deployed.

In the UK and Europe, modular building is seen as a viable and achievable solution to the affordable housing shortage. And these markets are approaching the problem in
novel ways.

In Australia, and particularly in the main population centres of Sydney and Melbourne where median house prices make the eyes water, housing is way beyond the reach of many; not only those who are at a financial disadvantage, but also people who earn a reasonable salary. Construction of new public housing is at its lowest level for 40 years and waiting lists are long.

The Federal Government is looking at innovative ways to finance public housing. The Affordable Housing Working Group Report of 2016 focused on models to attract greater institutional finance into affordable housing. “The Working Group found the “bond aggregator” model was the most likely to attract at-scale institutional investment, and cheaper and longer term finance for community housing providers. The bond aggregator issues bonds to investors and then uses the funds raised to provide loans to providers of affordable housing,” says a spokesman.

A bond aggregator will provide long-term funding of up to 20 years, as opposed to the current funding model of government grants, stock transfers and short-term, high-interest bank loans. It’s a plan that could see hundreds of millions of dollars raised from the bond market.

Treasurer Scott Morrison was quoted in The Australian Financial Review as saying: “An affordable housing bond aggregator would allow a financial intermediary to attract greater private sector investment into affordable housing. This would give community housing providers access to cheaper and longer-term debt, freeing up capital for the construction of new affordable housing.”
The announcement is expected in the May budget.

The Affordable Housing Working Group report also acknowledged that a range of factors are needed to increase the supply of affordable housing. Encouraging the use of innovative and energy efficient building techniques, such as modular construction, may help to increase supply, and reduce the costs of building and maintaining affordable housing, the spokesman says.

Evolve Housing, one of Australia’s largest providers of community housing, manages a portfolio of over 4,000 properties and houses more 10,000 residents. The not-for-profit organisation also owns and develops properties within that portfolio and manages properties for private clients.

Evolve Housing is now working on its first modular project in conjunction with Rombro Constructions. The development of 23 studio apartments in Guildford, NSW, uses conventional building techniques for the basement level up to ground floor modular for the remaining four levels.

The apartments will deliver mixed tenure across a spectrum of groups including social housing (for people on low incomes) and affordable housing (for working people on low to moderate incomes). “We are also looking at dedicating a couple of apartments for young people who are experiencing difficulty in accessing accommodation,” says David Risbey, General Manager of Developments Delivery at Evolve Housing.

“We plan to develop one modular building project and learn from it — to gain a better understanding of the process and outcomes,” he says. “There are several reasons why we chose modular construction including industry innovation and leadership, but the main one was the benefit of higher quality outcomes with offsite manufacturing, as opposed to an on-site construction environment. Other commercial factors include the speed of construction which means that project revenue, plus housing outcomes for our tenants, are achieved earlier than conventional construction.”

Evolve will own and retain all the apartments. 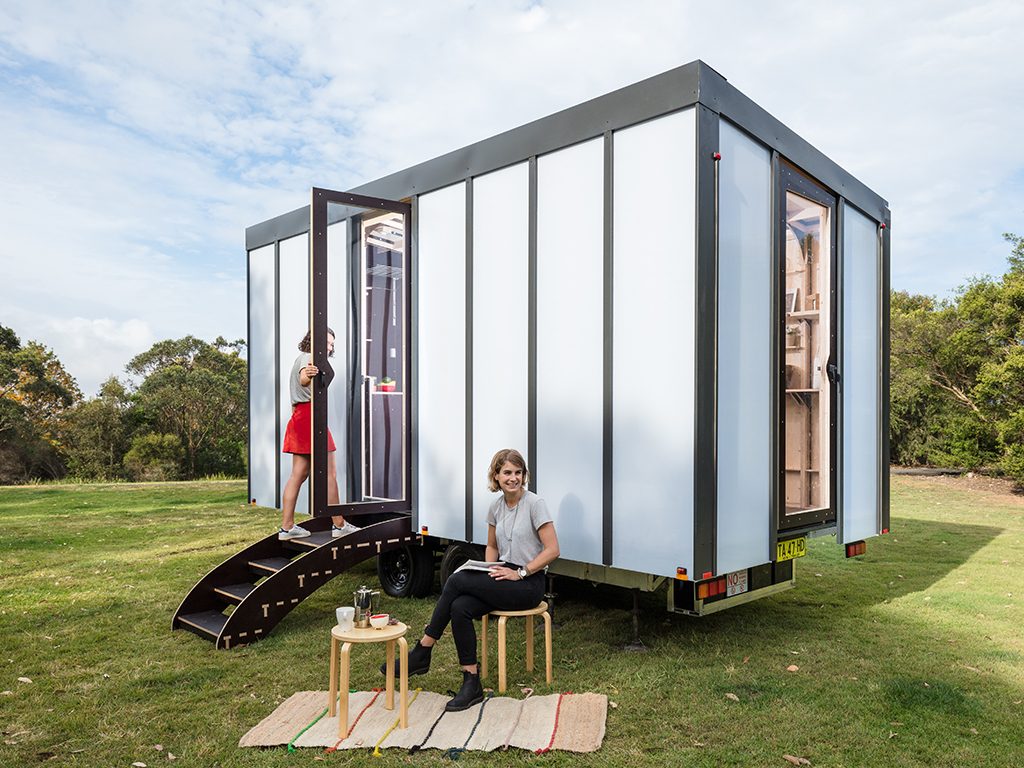 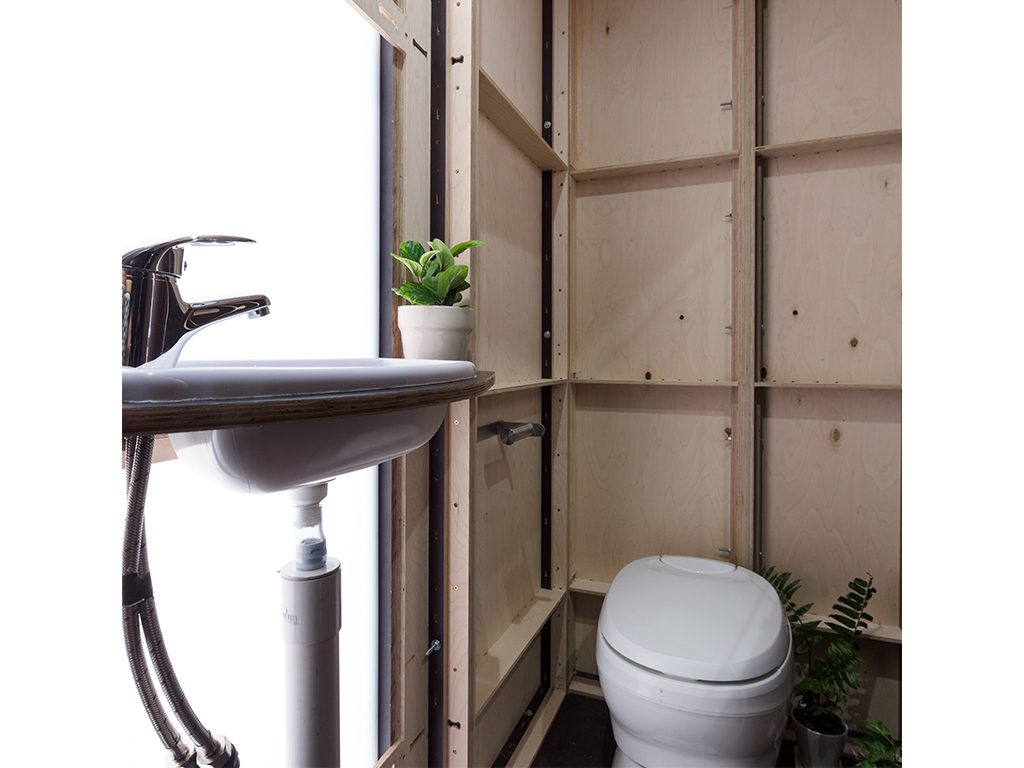 Risbey says that finance for the Guildford project was possible because Evolve could demonstrate 40-45 per cent equity in the project and has vested title in housing to produce 40 new leveraged dwellings.

Modular buildings are turning up in all sorts of styles and guises as solutions to housing problems and fold neatly into such movements as the micro-homes trend. This architectural and social movement advocates living in small homes, which are loosely accepted to be anything less than 50 square metres. It is a response to the cost of housing, the cost of maintaining a large house, the ethical issues of consumerism and the expression of a desire to live more sustainably. Socially progressive, the movement is most active in America, but also exists in Canada, Europe, the UK and Australia.

Australian company Big World Homes has designed 13.75 square metre homes, which are sold online for $65,000, delivered flat packed, and assembled after watching a YouTube video. The homes are completely off the grid — electricity comes from solar panels and water from a collection tank. Big World Homes promotes the product as being a transition from renting to buying and is proposing affordable “communities” on unused land in urban centres for these off-grid homes.

Philanthropist and co-founder of Flight Centre, Geoff Harris and his son, Brad, have initiated a similar project, funding 57 modular homes for disadvantaged people on vacant VicRoads land in the inner west in a bid to help tackle the problem of homelessness in Melbourne. They are funding $4 million of the $5 million project.

Units have been designed by architects Schored and are being built in Melbourne with the aim of installing them at the rate of one a day at a cost of $80,000 each. Launch Housing, a provider of community housing and homelessness support, will manage the tenancies.

When the land is no longer available, the homes can easily be moved elsewhere.

All over the world architects and creatives are working on prefab housing that provides answers to social problems of affordability, sustainability, space or simply as a way of touching the ground lightly. There is no limit to the imagination. Domes, curves of steel, boatbuilding principles, bamboo homes, recycled everything and even snap-together foam.

A Dutch firm has designed a modular system that transforms any empty building that has access to water and electricity, into homes. The prefab kit, called The Hub, contains a kitchen, bathroom and toilet, heating, a sound system and internet connection, that can, in days, turn empty office buildings, factories, shops or virtually any vacant space into apartments. Innovative financial arrangements, such as leasing The Hub, make it accessible to people on a low income.

Land shortages have been addressed creatively with the creation of amphibious prefab homes. In the UK, Baca Architects have created homes that rise and fall with the water level, thereby also being suitable for flood-risk areas. Canals, harbours and rivers become the new addresses. In Glasgow, a 30 million pound master plan for the city’s Prince’s Dock includes a floating street of apartments and houses. ■