Please turn your device to portrait.
CONTENTS
Subscribe to Built Offsite_Monday
PAGE 25 OF 33
Issue 02
BUILT OFFSITE CONTACT US
wesbeam
TIMBER IN PREFAB - THE DISRUPTION WE NEED TO HAVE
BEDROCK
Issue 02

TIMBER IN PREFAB - THE DISRUPTION WE NEED TO HAVE

FWPA ARGUES THAT USING TIMBER PRODUCTS TO PREFABRICATE CONSTRUCTION COMPONENTS IS AN OPPORTUNITY FOR THE BUILDING AND FOREST PRODUCTS SECTORS TO JOINTLY ADDRESS SOME OF THE BIG ISSUES OF THIS CENTURY: PRODUCTIVITY, COMPLIANCE WITH STANDARDS, SUSTAINABILITY, REDUCING CARBON EMISSIONS, IMPROVING THE AFFORDABILITY OF HOUSING, AND DESIGN.

Forest and Wood Products Australia (FWPA), the timber industry’s service company, is taking a leadership role on fronts including research, training, networking and the funding of the specifier-focused advocacy program, WoodSolutions.

WoodSolutions has been working at the leading edge of the design communications in relation to prefabrication through a range of complementary channels.

It engages with industry through an extensive website, seminars and online education that attract CPD points, road shows and sponsoring professional association awards that showcase excellence in the use of timber.

It also recently assembled a range of property development, construction and design professionals as an advisory team to pilot a program working with people and organisations engaged in the building supply chain that are considering delivering mid-rise projects in timber.

Neylan says that prefabrication combined with timber has advantages for developers and builders in terms of the speed of construction, safety, productivity and environmental credentials.

In terms of designing, he says it is a team approach. “Everybody is integrally involved.” That includes quantity surveyors that are looking at costs, engineers looking at structure, fire and acoustics, and potentially building certifiers considering compliance with codes and standards.

The development was designed around maximising the use of prefabricated timber components and included prefabricated hybrid timber walls and floors and roofing cassettes. This resulted in the project being built faster than the traditional concrete alternative and at a lower cost.

In order to maximise the advantages of prefabrication, it is important that the concept design, which will be submitted for planning, considers standard modules, Pradolin says. “This maximises efficiency and minimises costs. This new way of thinking – designing with prefabrication in mind –  can easily be extended into other areas, including schools, hospitals and mid-rise retirement villages.” Pradolin says that once some of the domestic builders establish a proficiency in this segment of the residential market, the time and cost advantages will become more obvious to developers.

“Timber construction is the way of the future; it’s good for the environment by capturing carbon, it’s much quieter during construction as there are fewer trades on site, and it’s also cheaper and quicker to build. It’s a no brainer from a developer’s perspective” WoodSolutions Program Development Manager for mid-rise construction, Paolo Lavisci adds to the team’s resources with extensive experience as an engineer designing timber buildings in Italy.

“Timber construction is the way of the future; it’s good for the environment by capturing carbon, it’s much quieter during construction as there are fewer trades on site, and it’s also cheaper and quicker to build. It’s a no brainer from a developer’s perspective.” Robert Pradolin –WoodSolutions Mid-rise Advisory Program

The knowledge gap many architects have in Australia around both lightweight and engineered timber materials is not too deep or difficult to overcome, he says. FWPA through WoodSolutions offers seminars and training that provide CPD points for architects and engineers so they can engage with the materials.

One challenge for engineers can be understanding the different performance qualities of timber products compared to the known qualities of concrete and steel. Lavisci explains this is more pronounced for solid timber, hardwood trusses for example, however when engineered wood products are used their qualities are very reliable, as is the finish. This leads to a level of familiarity that makes them easier to understand in terms of designing.

The overall trend in construction is towards increased offsite prefabrication, he says. This does not necessarily mean volumetric prefabrication – such as modular bathroom pods for apartments – though that is a growing sector.

It is also possible to achieve bespoke outcomes while still using prefabricated elements. The advantage of things like panelised elements is they are easy to transport, can be prefabricated to a high quality standard, speed up construction and improve site safety. Because of the distances involved for getting materials to construction sites in some parts of Australia, the lighter, more easy to assemble prefabricated timber elements can deliver significant benefits. Timber in prefabrication is also not limited to linear designs. It can also produce beautiful, twisted forms. For these, prefabrication has distinct advantages as everything can be checked before it goes to site. This creates new freedom for designers too. “You can have straight line elements, that are then preassembled into a hyperbolic parabola,”  for example.

One area where timbers in prefabrication differ from more industrial materials is the level of detailing in the design,  he says. It requires a little more effort as the tolerances are to the millimetre rather than to the centimetre as it is for conventional on-site approaches. “You have to design for prefabrication so materials are cut to measure in the factory, not adapted onsite.”

He says some suppliers are in a position to bridge that gap in terms of detailing if needed. Some of the manufacturers of LVL elements and cassette systems can take off from the drawings and add the required fire and acoustic elements in their own shop drawings and present the optimised solution in the bill of quantities provided to the architect or builder. Lavisci says Building Information Modelling (BIM) can be useful for achieving an optimum outcome where both the designer and the supplier are engaged with it. The new Advanced Training Centre for Prefabricated Construction is something Lavisci believes will produce important effects for the whole Victorian economy. Tony Arnel, former chairman of the World Green Building Council and Global Director of Sustainability for leading engineering firm Norman Disney & Young, recently joined the board of FWPA.

A life member of the Australian Institute of Architects and founder of the Green Building Council of Australia, Arnel has been a long-time sustainability champion and advocate of timber products in construction. Arnel says one of the reasons he was attracted to the board was FWPA’s focus on managing the growth of an intrinsically sustainable material.

“No other material has the potential to help us meet the challenges of modern, sustainable construction,”  Arnel explains. “The industry is beginning to embrace timber as an environmentally sustainable and renewable material, and using it to build faster and cheaper than ever before. It certainly ticks a lot of boxes.” Timber and engineered wood also offer advantages in terms of thermal and energy efficiency performance, both of which have minimum requirements under state building codes, Arnel says Combining these materials with the high-tech, precision environment of the factory also provides a way to address issues in terms of  build quality.

Compliance has been a major challenge for the Australian construction industry, and prefabrication is one way to ensure final outcomes meet specifications and perform as they were designed. Arnel says the use of timber products in the construction industry is increasing as recent changes to the National Construction Code allow for timber as a deemed-to-satisfy solution for multi-residential and commercial buildings in Class 2, 3 and 5 up to an effective height of 25m.

Prefabrication and offsite construction is also continuing to accelerate the market, he says. “Builders and developers around the world are using modules, for example, in apartment projects.” “In the last decade we’ve seen a growing and broader understanding of engineered wood products, particularly cross-laminated timber,” Arnel says, pointing to Lendlease’s latest tall timber project, International House at Barangaroo South in Sydney, as a showcase of how prefabricated CLT works.

“No other material has the potential to help us meet the challenges of modern, sustainable construction.”
Tony Arnel – FWPA.

This kind of project “challenges the market to rethink conventional building” as it highlights the time and cost savings, and increased productivity that innovative products and processes generate.

“We’re seeing an attitudinal shift as some top quality design outcomes are achieved, particularly with modular design.” Advanced engineering is also supporting higher quality outcomes. And while there are issues that need to be carefully considered, such as structural engineering, fire and acoustics – they aren’t insurmountable obstacles. Arnel says the current climate, both economic and political, demands a move away from “business-as-usual thinking”.

“While we tend to think of disruption in terms of technological change, the twin drivers of climate change and economic imperatives will mean the industry needs to look for resource efficiencies. Timber, one of our most ancient materials, is a new disruptive force that is poised to reshape the way we build.” 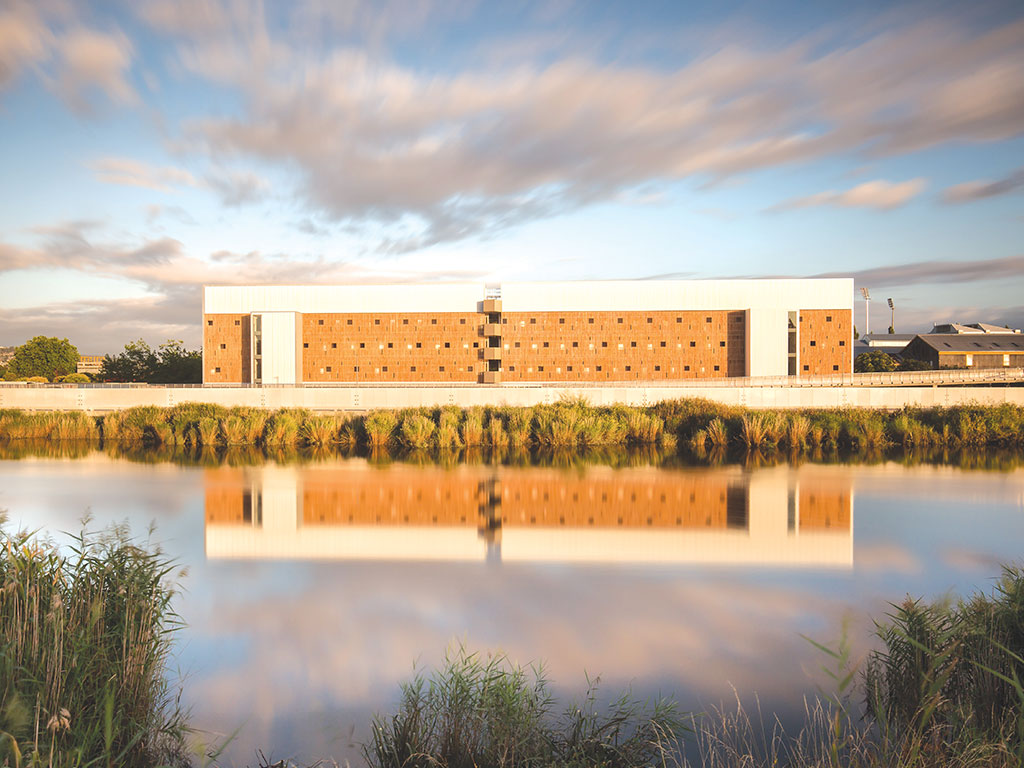